How oddity can add news value to your company’s story

Your company’s unique, entertaining stories can communicate your mission through earned media coverage. 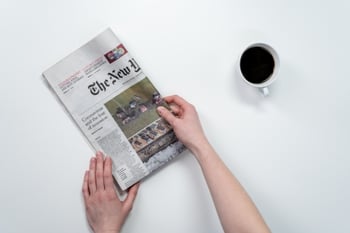 When you think of news, you might imagine serious, consequential topics. While these make up a large part of news coverage, it’s important to remember that not all news has to be dire or grave. News is “what’s new,” and extraordinarily unique, odd, and novel events can be newsworthy.

Newsrooms look for stories that demonstrate news value, so if you want to generate earned media coverage for your company, you must incorporate the elements of news journalists look for in your media pitches. News consumers are more likely to care about and interact with news stories that contain these elements.

One of these news values is oddity (also referred to as novelty), which encompasses unique, unexpected, and eye-catching stories. Stories with oddity offer audiences something interesting that they have never seen before.

Novelty and oddity in the news

Novelty stories may not carry the same consequential weight as hard news stories, but they are still important to a healthy news cycle. Similar to human interest stories, novelty stories can provide a lighthearted break from overwhelming news, keeping consumers engaged.

Oftentimes, novelty stories showcase something funny to attract news consumers. People Magazine ran a story about a white lion in a China zoo whose mane looks like a mullet. That’s not something you see every day! And what’s more, the story says the lion “styles (the mane) himself!” That’s funny and almost unbelievably odd.

Novelty stories are a type of lifestyle journalism, and this story is purely for entertainment value. Remember: Novelty stories must cover something audiences have never seen before, which is where the name “novelty” comes from — “novel” means “new.”

While humor is one route you can take with novelty stories, it’s not a must. Some of the biggest novelty stories aren’t funny, they’re just interesting and new.

NASA earned extensive media coverage in July after it released first-of-their-kind images from the new James Webb Telescope. The images depict regions of the universe in “groundbreaking” and “eye-popping” detail, as reported by NPR — an excellent display of novelty.

This NPR story doesn’t just exhibit news value through novelty, though. NPR published the story the same day NASA released the images, so it is also timely. NASA has a prominent space program, and above those two news elements, this story utilizes extremes to draw traffic: The first image released reveals thousands of galaxies, some of which reside 13 billion light years away. That means this image looks up to 13 billion years into the past, which scientists say is near the universe’s inception.

These extreme findings give the story great news value, which is why NASA earned coverage in almost all top-tier media outlets within a day of releasing the images. This story is not immediately consequential — NASA didn’t announce an imminent asteroid strike or the discovery of alien life — but its oddity and novelty skyrocketed it onto many front pages.

Must Read: What journalists say about media pitches and sources

Think about what unique work your company is doing that other companies aren’t, and take a different angle when telling that story.

This Wired story spotlights Robust AI, a company that developed a robot that can work with humans and boost productivity by reading body language — all without taking jobs, according to the story. Many companies develop robots that boost productivity, and if Robust AI focused on that part of the story, it wouldn’t have earned media coverage because that is not odd or interesting. By identifying the oddities and novelties (the robot can read human body language and doesn’t threaten jobs) Robust AI found the news and interested journalists, successfully earning media coverage.

Robust AI isn’t the only company that earned media coverage in this story. Wired also mentions an Amazon robot similar to the Robust AI robot, calling the Amazon robot “rudimentary.” This simplicity could be a reason why Amazon fell below Robust AI in the inverted pyramid story structure. In other words, Robust AI had greater oddity and greater news value, earning priority.

Your company’s novelty stories can be about topics other than innovation too. Similar to how a human interest story about one of your employees can reflect your company’s personality, a novelty story about your company can directly showcase your message and values on a deeper level. The Lincoln Center for Performing Arts earned media coverage in The Associated Press in a story about a mass, multicultural “re-wedding” ceremony it hosted for hundreds of couples whose weddings were halted or scaled back during the pandemic. Extremes contribute to this event’s oddity because a wedding for hundreds of couples is more unique than a wedding for one couple, as well as the idea of a “re-wedding.”

The short, four-paragraph story about this “symbolic multicultural ceremony” showcases the Lincoln Center’s value of diversity, which reflects its “Commitment” webpage. Earned media coverage for novelty stories like this can greatly benefit your company by communicating your mission, which consumers say is important, to a greater audience. This reaches potential and current customers on a deeper level, making them more likely to choose you over your competitors.

This is just one benefit to earning news media coverage for your company. To learn more about developing your relationship with reporters and how it benefits you, download our e-book “Learn Media Relations from the Media” today.