Writing for the media: prioritizing with the inverted pyramid

Prepare your story for print publication 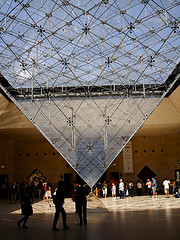 Reporters and journalists work with a tool known as the “inverted pyramid” in mind; it is a mainstay of traditional mass media. For the general public, the inverted pyramid is also known as a funnel.

The inverted pyramid made its debut when people communicated regularly using the telegraph, when a connection might drop at any moment. The person sending the telegraph would include the most essential information first in the transmission in case the additional information did not get delivered to the receiver.

Today, if a reporter writes a story and it doesn’t fit, an editor can cut from the bottom up to fit the needs of the publication. With the inverted pyramid, editors know that they can remove the less important information from the bottom of the story without changing the substance or ruining the flow.

Some people find the inverted pyramid to be uninteresting and unappealing, but the news isn’t meant to be a mystery novel; if a piece didn’t list the who of the story until the end and 15 words needed to be cut in order for it to fit, the reader would never know who the story was about. The beauty of the inverted pyramid is that it flows and reads well, and is universally utilized in print publications across the world.

As public relations professionals, we at Axia Public Relations are mindful of the things that reporters and editors look for in stories, which is why we constantly strive to present the best product to the client and the media. It isn’t always an easy balance between client and media, but with tools like the inverted pyramid, our jobs are a little easier.

Download our media relations e-book and check out our other blog posts for helpful hints and insights into the PR world.

– Marjorie Comer is an Account Manager at Axia Public Relations. She graduated from Rockhurst University with a Bachelor of Arts in communication on a media track. Marjorie proudly supports her Kansas City sports teams. Her colleagues nicknamed her “The Hammer.” Follow her on Twitter @Marjorie_Comer.