How prominence can add news value to your story 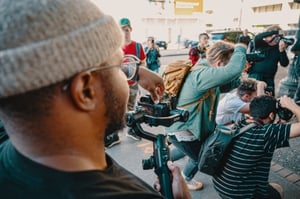 Have you ever seen a news story about a celebrity doing something ordinary and thought, “Why do people care?”

The answer: Because they are a celebrity! A story pitch featuring a famous person is likely to catch a journalist's attention, and the story they publish will likely catch a news consumer’s attention in turn.

Journalists consider a variety of news elements — also called news values — when deciding which pitches are newsworthy enough to write about. The most newsworthy story is the one that the most number of people will care about, which is how newsrooms prioritize the stories they cover. As a public relations, corporate communications, or marketing professional working with newsrooms (media relations), you must think like a journalist if you want them to accept your pitches.

Journalists think like their audiences, and their audiences love hearing about famous people. This news value is called prominence. Look at the headlines in lifestyle journalism outlets like BuzzFeed — most feature big-name celebrities or other prominent people. It seems simple, but it’s important to understand: News consumers are more likely to care about a story if they know the people in it.

Prominence in the news

Think again about celebrity news stories, but take the celebrity out of it. Do you still care about the story? If the person is famous enough, prominence may be the only news value you need to skyrocket a story to the front page.

You may have seen news lately about the defamation trial between actor Johnny Depp and actor Amber Heard, his ex-wife. Many outlets covered this trial day by day, but why? Court cases happen all the time, so what makes this one special? Well, prominence! With two big names in the trial — Depp, a “Pirates of the Caribbean” star and Heard, a star in DC Extended Universe films including “Aquaman” and “Justice League” — national audiences are likely to perk up when they see the headlines.

You’ve also probably heard of the scandal between former President Bill Clinton and White House intern Monica Lewinsky. This story is driven by prominence — one of the key players was the president. Had it been an intern and another White House staff member, this story likely wouldn’t have made the news.

This doesn’t just apply to big-name celebrities. Taylor Swift or Chris Evans probably won’t drop by your client’s event. So, when you are pitching a story about the event to journalists, the key is applying the prominence news value to people who are prominent among your target audience. What makes someone prominent? Here are some examples of non-celebrities with prominence:

The list doesn’t end there. Prominence also applies to organizations, corporations, and individuals who are not entertainers, such as businesspeople. Target landed in the news after warning that its profits would drop as it cleared inventory. While many companies are reckoning with supply and demand imbalance, Target’s prominence greatly contributed to this story’s newsworthiness.

As always, remember your audience when considering prominence. A band that is famous locally will have prominence with a local audience, but it’s going to take someone with a bigger name to resonate regionally or nationally.

Many University of Missouri students know Harlan, a beloved dog whose owner often walks him around campus. Though not a person, Harlan is a prominent figure in the university community, which is why their city newspaper published a story about Harlan appearing on new signs around campus (and why the university put him on the signs). Readers of that newspaper, which serves a local audience, will recognize Harlan’s name in the headline and read the story, while readers from other regions will not know who “Harlan” is, skipping the story. Notice two things:

To learn more about strengthening your relationship with journalists, read our e-book “Learn Media Relations from the Media” to get started.

Photo by Brett Sayles from Pexels