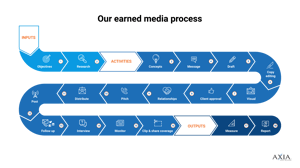 We’ve previously discussed what earned media is and its role in public relations. However, knowing about earned media is one thing, and doing it is another. For someone unfamiliar with this process, it can seem almost impossible to know where to begin and how to get through it. However, there is help.

At Axia Public Relations, we’ve developed our own system for earned media we’d like to share with you. Here is a visual chart showing how we do things and an explanation of each step. 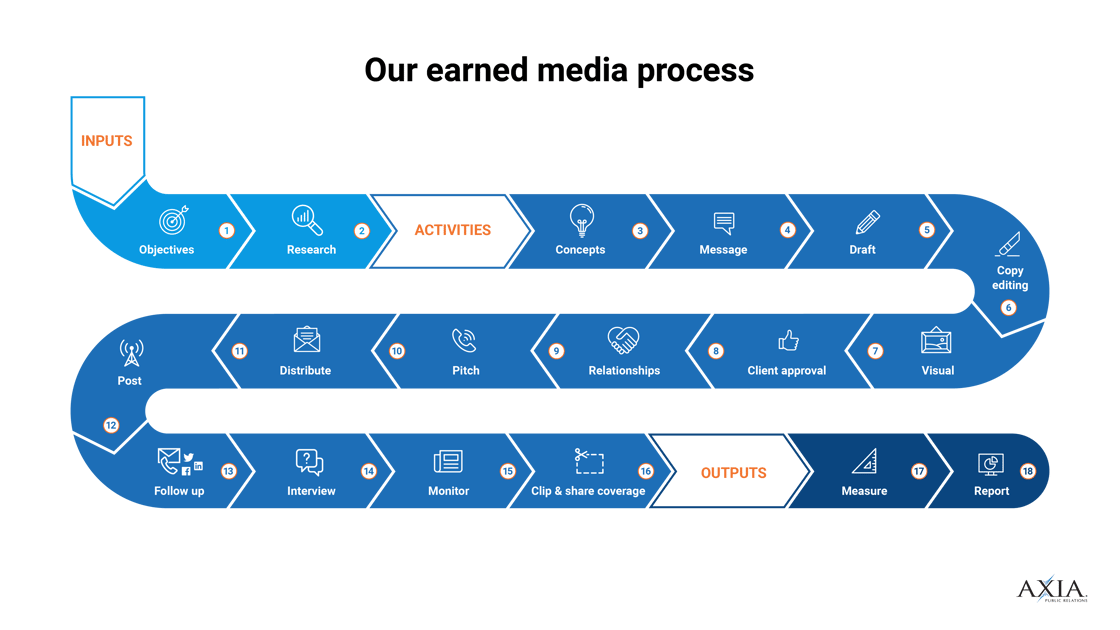 The inputs phase starts with determining your objectives for your earned media. These are framed as questions, such as:

This stage is vital as it drives the creation of the content pitched to the media.

In this stage, you research information related to the questions you asked in the objectives stage like:

When you hit this stage, it’s time to start finding company events that people outside of your company would be interested in. A story that isn’t interesting to the people you want to target or newsworthy to media outlets will not work. When looking through events that could be turned into a news story, ask “Who cares and why should they care?” to see if anyone outside your company would be interested in the event. It’s blunt; however, you need to be honest with yourself to develop a story that will interest both consumers and a newsroom.

Once you’ve figured out who gives a darn about your story, ask yourself “Will it help the reader have a better day or help them improve in some way?” Stories that answer this question with a resounding “yes!” have the most success at getting in the news.

Messaging is about making the general public or a journalist interested in your story. Avoid the generic self-promotion story. Here, you’re turning a company event into a story that makes the audience the star.

Drafting is where you put pen to paper and start making the actual content. It can be:

Whatever it is, write it down.

Once you’re done with your pitch, get copy editors to look at it. A properly copyedited submission gives you a better first impression and reduces the amount of work the newsroom has to do to get it ready. The newsrooms might still make edits, but by having a copy editor ensure everything is clean and in the media outlet’s style, you’ll reduce their workload.

When developing the content, make sure to include a visual. A story without a visual is dull. In our experience, journalists report they spend more time finding a visual than any other part of a story, so help them by including a visual with content you’re sending or pitching to them. A journalist who receives a pitch or story with a visual is a happy one.

This might confuse some old-timers. In the past, media outlets usually did the visuals themselves. However now, it’s best to do it yourself.

Once the content is created, you need to get it approved before you can start pitching it. If you’re a PR firm, you’ll need approval from the client. Those doing it in-house will need approval from someone or a group higher-up in the company. This will likely take a while since these people tend to be very busy. After you’ve received the green light, you can move on to the next step.

This is the phase where you begin reaching out to the media and use the relationships you’ve built with them to start the pitching process. Having a pre-developed relationship with a media outlet is the best way to kick off this phase. If you don’t have any relationships with media outlets, now’s the time to start developing them.

With your relationship established, it’s time to begin the pitch. Pitches can be done by:

At Axia, we usually make phone calls. Phone calls are great for journalists you have relationships with or if you need to start a relationship. It’s best to have the journalist's cell phone number so you can call them wherever you want, especially when people are working from home like during the COVID-19 pandemic.

To kick off the process, let them know you’re going to pitch them a story or ask permission to pitch to them.

A trick we’ve learned is the “one-two punch.” Leave a voicemail about a pitch, then email that person about it. Informing them twice increases the odds of them noticing it or allows them to give the pitch a second chance if they discarded it previously.

We’ve found that asking for permission to pitch to a journalist is a great idea. This shows the journalist that you respect them. Journalists can say yes, no, or simply not respond. If you’re not getting anything from them, give them a reasonable amount of time to respond. If they don’t respond within the time you gave them, send the pitch over to them anyway. We’ve never had any journalists say “No, we don’t give you permission” in all our years of doing PR.

Once the pitch stage is done, distribute the story to the people you contacted in the pitch stage. Email is most often done for doing this. Faxes and mail used to be common, but email has taken over as the most popular way to pitch. It’s best to stick with what’s used instead of trying to invent some new way to pitch.

Posting is putting the story on your site's newsroom and in wire services, such as a business wire.

Despite what people think, stories in newswires actually tend to reach more consumers than journalists. Journalists are getting hit with many pitches a day, sometimes over a hundred. They no longer need to nor have the time to scroll through a newswire to find a good story. Although this may sound discouraging, it’s still important if you have the money. A story in a newswire will reach at least dozens of newsroom sites instantly, getting published almost instantly to sites that subscribe to them. However, if you have a low budget, the money is better spent focusing on the pitching process.

If you have a PR firm handling your story, they can send your story out to a newswire for far cheaper, so consider taking advantage of it.

The follow-up is when you ask the reporter you pitched the story to about competing stories and the journalist’s time and availability. This stage sounds simple and is vital as it helps you see how your pitch went and what your story’s status is in the newsroom. Knowing what’s going on with your story keeps the process smooth and avoids any problems that may arise.

Interviews between the journalist and someone related to the story are the next stage of the activities phase. These are initiated by the media contact. Interviews are usually done by phone or email. In-person interviews have declined due to journalists’ increasingly busy schedules.

Email interviews are becoming more common, especially among younger journalists. These get the off-the-cuff comments journalists like and don’t take up as much time as phone interviews.

If your story is focused on a product, you might not get an interview at all. Ideally, you’d get interviewed for these but sometimes, journalists don’t have the time to get an interview set up with your media contact.

Monitoring is tracking the news to see if your story has come out. Service bureaus such as Meltwater or bots are used for monitoring. In this stage, it’s best to use all available monitoring resources so you can avoid stories slipping through the cracks.

Once your story starts appearing, finish up the activities phase by clipping out parts of the story and sharing them with your client (if you’re an external PR firm) or with people in your company who would be interested (if working internally).

The measure stage is where you quantify your story’s results. In this stage, you start turning questions, such as:

An after-action report on the story and its effects on the company is the final stage of our media process. No matter what time frame you choose to have the report reflect, you need something on paper to show your story’s results.

Our process has been successful over the years as we get stories for clients and the results they want. However, you might have your own needs that aren’t covered here, so feel free to modify or incorporate elements of it to develop your own earned media process.

If you’re going at it alone right now and would like help from someone experienced in the earned media process, contact us and we’ll be happy to help.