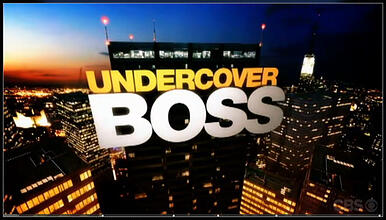 You're unlikely to be featured on the show without being the boss.

(Editor's note: Our PR firm helps corporations and their CEOs/leaders get on TV, and bosses get on TV shows like Undercover Boss. We don't help employees nominate their companies for Undercover Boss. Only top company leaders and their head of marketing/PR should contact us if they'd like to do a casting interview for the show. But don't discuss this idea with others in your organization. It must be a surprise/secret.)

Recently, we received a call in our office from the casting coordinators of CBS’ hit show Undercover Boss. She found us through our blog (which means we’re doing successful things regarding search engine optimization), and she noticed our PR firm has some amazing clients. She suggested our clients participate in the show.

Here’s the lowdown I got on how companies get on Undercover Boss:

Stage I: The Screening

First, there is a casting interview by phone with the vice president of casting and talent relations as well as a supervising casting producer. The first step is ensuring the company being featured is agreeable to the basic expectations and minimum requirements CBS has for the Undercover Boss format.

The requirements are flexible if the company has a great story and the boss has a good reason for wanting to go undercover.

After the initial casting phone interview, if the company is selected to move on, the casting producers will fly to the undercover-boss-to-be’s office location and do a sizzle reel (a short, fast-paced video that serves as an introduction). This requires an on-site interview for about 90 minutes and is submitted to CBS, which decides who is selected.

What does it cost to participate?

There are no participation fees – no media buys, sponsorship participation, production fees, or other participation expectations; the featured company’s only financial responsibility is the reward money given to participating employees at the end of the episode. CBS sells its advertising, and while some undercover companies opt to buy advertising during the program, it’s certainly not required, nor even suggested. That means everything the company shells out throughout its Undercover Boss experience goes to its workforce.

The production team spends one to three days with the executive at home, in the office, with the family, and capturing their life story. This also includes formulating the disguise and undercover process. Those days must be shot consecutively. Then, the undercover boss must work five jobs in five consecutive days (perhaps not including travel to and from the different job sites).

The job sites may include retail stores, offices and branches, warehouses, call centers, manufacturing plants, and distribution centers. They may even be on a customer or vendor’s premises and could include other company events and locations.

How do they select the company employees to work with?

The company’s marketing, public relations, or human resources department knows which employees will participate with the undercover boss. That information is kept from the boss participants.

It’s clear that CBS has significant involvement and decision-making authority, calling all the shots on which companies are selected, which undercover representatives are selected, and which sites and employees are used for the interviewing process.

Diversity is important to Undercover Boss. The producers prefer younger, female, and ethically diverse CEOs, executives, and employees representing diverse ethnicities and industries. They prefer to work with the company's founder, especially those executives and undercover bosses with an interesting backstory, as mentioned. The company also must be headquartered in the United States. I’m sure if you’re a major brand and the undercover boss runs the domestic headquarters, they’ll probably consider that.

Unexpectedly, they are interested in a financial services company. Other business reality shows tend to shy away from these types of companies, citing that financial services companies are less interesting, more technical, and less appealing to viewers at home. This opens the doors to a whole new crowd of companies to share in the kind of publicity an appearance on the show can create.

Why you probably want to do Undercover Boss

Many companies get involved initially because of the amazing branding opportunity and the widespread visibility of being televised nationally during prime time on a major network. What’s more, they don’t even have to pay for that exposure; what bosses pay out at the end of each episode in rewards to employees is less money than what CBS charges for two 30-second spots during the show. Think about that for a minute regarding visibility and bang for the buck.

The other reason you want to do Undercover Boss

Other companies, while excited about the visibility aspect, see and use this opportunity more to gain insight into the company’s operations and customer relations – not to mention employee relations (see our related blog post on Massage Heights). This is a unique chance for the higher-ups to get candid and unfiltered feedback from the people on the front lines in a way they never could from behind their desks.

Why you’ll say you’re glad you did Undercover Boss

According to producers, the real outcome and true benefit of participating, as explained by past undercover bosses, is the ability to give back and make a difference in the lives of employees, who are a company's most valuable asset and competitive advantage.

The featured company must not only meet the eligibility criteria and be willing to give up its time, but it must commit to the “reward” portion of the show. That’s at the end of each episode, where the undercover boss reveals themselves to the featured employees with whom they worked and offers them financial rewards to help them in their personal situations. This may include a scholarship, promotion, raise, or bonus. Sometimes, the undercover boss has given a car, a house, assistance with medical bills, a vacation, a kid's college fund, and retirement funds. But it’s not just about budgeting the money for the reward. Often the undercover bosses get deeply emotionally involved and desire to give even more than they had originally planned. They’ve connected with their employees on a new level and value the experience of doing kind things for those associates in need.

Regarding getting media attention for our clients, Axia Public Relations is among the best in the business. That’s why we specialize in media relations. Whether you want to join the ranks of Undercover Boss or do more of a private experiment, we can help you.

– Jason Mudd, APR, is CEO of Axia Public Relations. He is an Emmy-Award-winning accredited public relations practitioner, speaker, author and entrepreneur. His public relations portfolio includes work for established national and emerging brands such as American Airlines, Budweiser, Dave & Buster’s, Brightway Insurance, Florida Blue, H&R Block, Hilton, HP, It Works!, Miller Lite, New York Life, Pizza Hut, Ray Charles, Southern Comfort, Verizon and more. Connect with Jason on Twitter at @jasonmudd9 and Axia Public Relations at @axiapr. Be sure to tweet and share your thoughts below. We’ll read and respond to each of them.