How conflict can add news value to your brand’s story 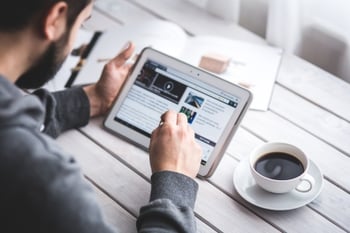 Everyone loves drama. Yes, even you. Look at the news — story after story includes some sort of physical or emotional conflict, from sports rivalries to company comparisons to celebrity face-offs. The truth is that news consumers love reading about drama, which is why conflict can add great news value to a story.

When a story has more news value, it becomes more newsworthy, meaning news consumers are more likely to care, interact, and engage with it. Newsrooms look for stories with great news value, so it’s important to incorporate elements of news in your pitches when trying to gain earned media coverage.

Conflict comes in many forms

You might be tempted to think your brand isn’t involved in conflict with any other company and this news value doesn’t apply to you. But conflict goes deeper than that. Let’s break down what conflict is, and what it is not.

Conflict is the opposition of multiple things. That could be two companies, two people, two products, two ideas, two teams — the list goes on. Some of the most classic examples of conflict involve politics. You may remember the 2000 U.S. presidential election, in which an extremely close race for Florida’s electoral votes between George W. Bush and Al Gore ended up going to the Supreme Court. This example is newsworthy for many reasons, with conflict leading the way. It’s a clash between two people, two political parties, and two sets of ideals. The key to its newsworthiness is the great consequences the results would have on U.S. citizens, the news consumers.

While that example reveals the basis for the conflict news value, your company likely won’t find itself in a conflict gaining national attention, and that’s okay. You are likely still involved in other, more regular conflicts you may not realize. Think about your competitors and your efforts to supersede them. That’s conflict!

Though more physical or visible conflicts like opposing parties or companies can make clear stories with this news value, don’t forget about abstract and ideological conflicts and how your company positions itself in those. Following the U.S. Supreme Court’s decision to overturn Roe v. Wade, several major companies pledged to cover travel costs for employees who must seek abortions in other states. By positioning themselves on a particular side of a national conflict, these companies became newsworthy. Consumers tend to support brands that stand for a greater mission or purpose, so establishing what your brand stands for in times of ideological conflict could boost your public image.

Take a look at this Business Insider story about an online electric car dealership. The headline, “Electric-car startup Polestar bets you'd rather buy a car from your couch than go to a dealership,” presents a conflict of ideas to interest readers: new, online car dealerships versus traditional, in-person dealerships. This conflict of ideas also implies competition between this brand and other in-person dealerships, adding news value to the story. However, while conflict certainly plays a part in this story’s newsworthiness, it’s not a great enough conflict to carry the story. Online dealerships and electric cars are both relatively new or novel ideas, which is another major contributing news value that makes the story interesting.

Thinking about ways like this to make your company’s regular, expected competition interesting can help you earn media coverage.

“Conflict” does not mean “crisis”

Do not confuse conflict with a crisis or crisis communication. Flaunting your company’s crisis will not go over well for your reputation. Remember, you want to earn media coverage to spread awareness for your brand among your target audience, and you want news consumers to perceive you in a positive light. When using conflict as a news value, you could focus on how your company has transcended a conflict, for example.

This Mashable story covers a conflict between the vacation rental company Airbnb and its customers, compiling a list of customers’ “horror stories” with the company. Ouch. However, the article includes a quote from an Airbnb spokesperson that defends the company and outlines its steps in addressing the conflict.

While the company likely did not pitch this “horror stories” compilation story to the news media, it understood that because it is a prominent company involved in a conflict, newsrooms would see news value in the issue and likely write a story about it. Airbnb was able to proactively issue a statement to Mashable because it understood the news value of conflict and recognized this conflict was newsworthy, even if the company didn’t want it to be.

It’s important to realize that you can’t merely state that your company is involved in a conflict, expecting news media to suddenly see the news value and pick up your story. You must explain how the conflict will affect both your target audience and the newsroom’s audience (these audiences should overlap). It’s crucial to explain why consumers should care about your company’s news. And remember — news is “what’s new,” so you must focus on what you’re doing now or in the future to interest external audiences.

Take the next step in earning media coverage for your company by downloading our e-book “Learn Media Relations from the Media.”

Photo by Kaboompics .com from Pexels