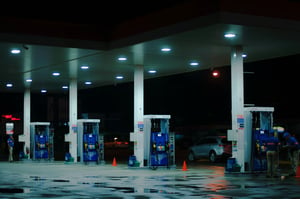 Mere days ago, in my hometown, a series of explosions and fires from natural gas leaks caused catastrophic damage, including fatalities, the destruction of homes, and the displacement of more than 8,000 families. At the epicenter of the devastation and mass evacuations of three Massachusetts towns stood Columbia Gas.


When the company’s president, Steve Bryant, stepped to the microphone, state officials and the public struggled to make sense of his commentary, which didn’t mirror on-the-ground action. His statements instead fueled concern and further discord, leading Massachusetts Governor Charlie Baker to declare a state of emergency and relieve Columbia Gas of its responsibilities. At the same time, Baker placed competitor EverSource in charge of the aftermath.


In the wake of the worst U.S. natural gas disaster since 2010, I find myself appreciating my life and my safety. Additionally, I profoundly understand the importance of my career choice: public relations. PR isn’t just press releases and social media posts. Those that work in this industry serve on the front lines in times of prosperity and challenge, and we must always manage the details and execute on a dime. From my vantage point, PR is a calling, not simply a profession.


It was therefore devastating to watch the numerous missteps from Columbia Gas the last several days. While standing shoulder to shoulder with neighbors evacuated from homes they feared they may never return to, I watched to see how the company would respond. During those hours of agony, the company offered only silence.


In a crisis, you never go silent. You lose credibility, and worse, you cause additional panic and even dangerous circumstances.

Columbia Gas was neither prepared for an actual crisis, nor did it have an idea of how to communicate with various publics. The media couldn’t accurately report the details given lagging communication, and the disaster spun further out of control. The result was a complete loss of credibility, and Columbia Gas was forced to relinquish control when Governor Charlie Baker stepped in to resolve what it could not.


Don’t operate a business without a crisis plan. Build a framework containing a list of spokespeople trained to speak with the media. Maintain a list of the media contacts who can immediately distribute information and extend your reach. Establish a short list of key communicators to craft messaging and details to all publics. Prepare a direct customer service line for inquiries. Add a page to your website that you can update instantly with FAQs. Don’t wait for a crisis. Believe one can happen and prepare for it.

A crisis plan anticipates the need for a direct line of communication to key company spokespeople. Columbia Gas remained quiet for hours after events unfolded, and once its leader, Steve Bryant, appeared for a press conference, he seemed ill-prepared for cameras and interviews. His vague, broad brush strokes left significant room for reporting errors, rumors, and deepened concern. The barrage of blunders left thousands of families petrified and state officials aggressively moving to take control.


In a crisis, your spokesperson must be ready to do the following:

Don’t be vague. Don’t show doubt. Instead, lead with confidence. Answer questions to the best of your ability. Tell the public what you’re doing, not what you don’t know.

Columbia Gas provided no statements or reassurances for hours after the explosions. The benefit of social media is that a company can rapidly distribute information during a crisis. Columbia Gas missed the mark by going silent and infuriated frightened customers. Had it not been for the local news media, thousands in the area would have been ignorant as to why numerous highways and exits were closed and traffic built up for miles.


With social media, you can provide updates in an instant and reach large swaths of your audience. Social media could be a savior, so keep your channels staffed and include it as a part of an overall crisis communication plan. 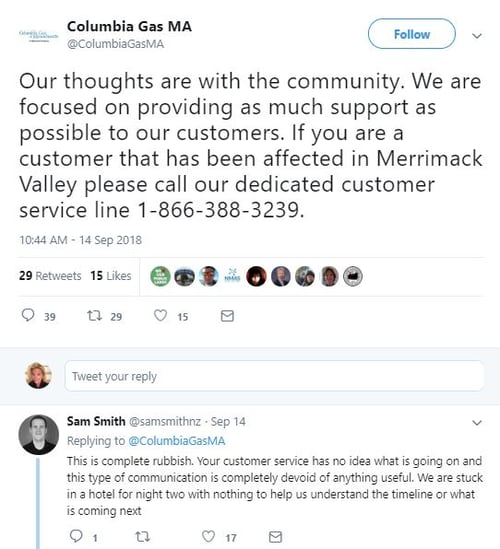 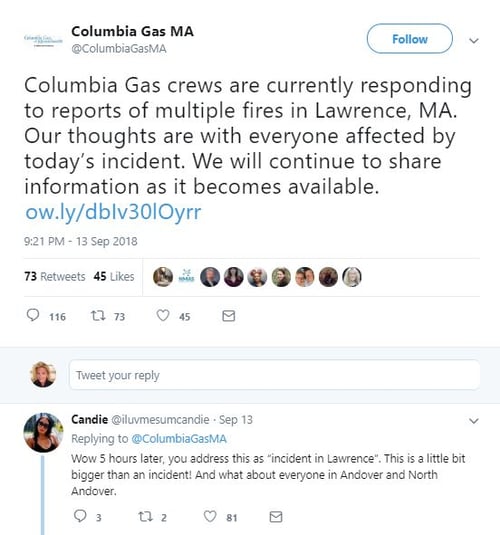 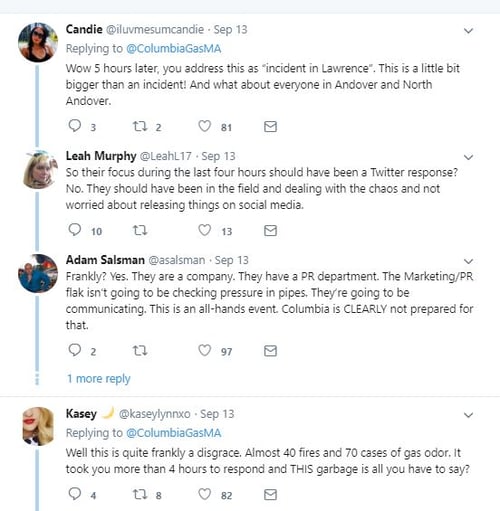 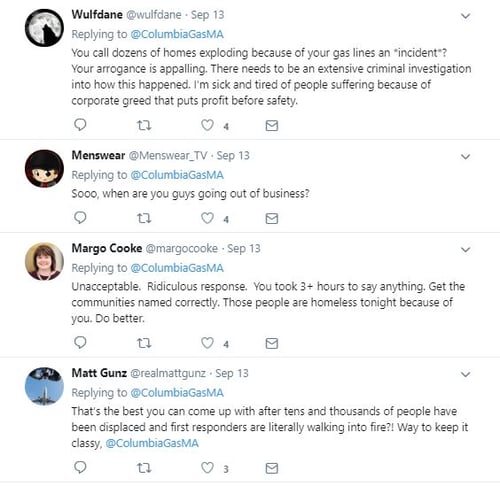 In the wake of a catastrophe, Columbia Gas offered very little reassurance and support to its customers and the general public. As a result, its reputation may be damaged beyond repair, and worse, its inaction caused increased concern and even panic among thousands of citizens.

At Axia Public Relations, we routinely discuss crisis communications with our clients, as we understand that tragedy can strike at any moment. You should create, review, and trial a crisis plan to protect you and your customers. To make this initial step easier, Axia’s CEO, Jason Mudd, has compiled a webinar on how to manage your business in a crisis. Axia also offers a complimentary guide, “Managing Public Relations in a Crisis,” that contains more in-depth tactics. 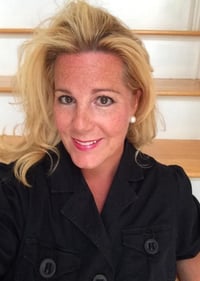 Clients love Wendy’s compelling writing. She has nearly 20 years of experience in technology, business, consumer, and nonprofit public relations. She serves on the Massachusetts Down Syndrome Congress PR Task Force and is a culinary enthusiast and champion for the special needs community. Wendy has worked with Axia Public Relations since September 2014. Learn more about Wendy.