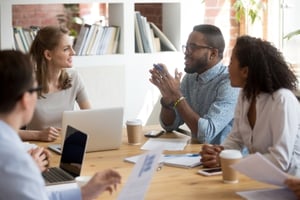 An organization’s reputation doesn’t just depend on provided services, customer relations, and public communications. Diversity and inclusion, both within the organization’s workforce and in the work it does, is an integral part of a company’s image.

According to Axia Public Relations CEO Jason Mudd, an organization’s reputation is its most important asset. Without a strong image, including exemplary diversity and inclusion work, your company will struggle to succeed.

One way Mudd recommends companies do this is by launching specific initiatives that focus on diversity and inclusion. For example, businesses should actively stay up to date with today’s changing political climate.

“Be more awake to what’s going on around,” Mudd said. “Organizations should be more sensitive and more inclusive. Also, you should ask, seek help, diversify and expand your horizons. Get involved in cultures and communities that you’re not currently in.”

However, getting involved with diverse communities and inclusion efforts is just the beginning. Mudd urges companies to partner with local communities and collect their feedback and input.

“Take what they share with you, keep it in mind, pivot, and adjust where you can,” Mudd said.

As the world becomes more digitally connected and social media grows in importance, online reputation management is more important than ever. That’s because the rise in social media has put consumers in control.

“Consumers are now able to have a voice, congregate, and collectively share messaging,” Mudd said. “They also can go on the attack, persuade, and certainly put a fire under companies to make them respond and be more socially considerate.”

This type of dialogue is exactly what companies must be participating to improve their diversity and inclusion efforts.

At Axia Public Relations, we are a team of experts that can help you with your crisis communication efforts while taking your public relations ambitions up a notch. Download our e-book “Managing Public Relations in a Crisis” for professional advice.