Marketers should take note: Men are finally migrating to Pinterest. 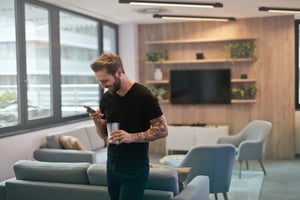 Men are taking on the aesthetically pleasing world of Pinterest, and public relations and marketing professionals should take note.

Pinterest is an American image sharing and social media service designed to enable saving and discovery of information with images and, on a smaller scale, animated GIFs and videos. This is done by scrolling through and saving pinboards.

Although women make up 60% of the app, male numbers have been on the rise since the beginning of quarantine in March 2020.

So why have some men decided to start using the app? With everyone at home, people have been using technology more to redecorate their spaces, causing people to wander to the ascetically pleasing world of Pinterest. For example, the increase in male users caused a 7% increase in searches for “kitchen storage solutions” than last year. In this quarter, there was also a six times increase in the number of men searching for “fashion streetwear,” “artists,” and “bread recipes.” There was a seven times increase in searches for “creative makeup looks.” These search increases allows more posts to be made about these topics and is bringing more people to the platform.

Pinterest is gathering a diverse audience with a positive and inviting atmosphere. This app is where people go for inspiration or calm. It allows people to be creative without much judgment.  Most of the content on the platform is positive, inspiring, and funny. Pinterest provides a safe space atmosphere, and one of the reasons why is because it does not allow political ads on its platform.

This is appealing to Pinterest account owners because it allows their posts or ads to appear next to a succulent or a beautiful couch, whereas on Facebook you have your ad next to your politicized family member’s post. Almost every other person’s feed on social media platforms is bombarded with offensive and depressing posts, and Pinterest feels like the refresher that most people need. On Pinterest, your posts and feed are political ad-free. Users as well as public relations and marketers pros like this part of Pinterest because it provides an escape and a positive attitude.

The increase in male users on Pinterest has correlated with their stock revenue. In fact, their numbers have quadrupled since the beginning of quarantine in March. Pinterest stock went up 30% last week because of the rise in male users. This makes Pinterest a booming medium-tech company that is on the rise.

Photo by Andrea Piacquadio from Pexels