What are the different types of media?

A guide to the five types of media your company needs 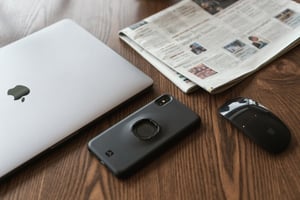 Before diving head-first into the different types of media, it’s important to first dip your toes in the water and learn what media is. Media is a communication tool used to deliver information. The three types of media are commonly known as news media, social media, and web media, but you might also see them referred to as earned media, shared media, and owned media.

Some other forms of modern media are print media, television, movies, and video games.

News media takes mass media elements and uses them to deliver news to a target audience or the general public. It’s any material or content that is written about you or your company that you didn’t create or pay for yourself. For example, your company can earn a story in Forbes as opposed to paying for advertising. In today’s world, earned media can come in a variety of new forms, such as being featured in a review (even bad yelp reviews) or through a tweet about your business that was liked and retweeted.

Social media is a digital tool, such as a website or app, that allows users to quickly and easily create and share content with the public. It’s the “evolving” media because the definition of it is constantly changing. Shared media is best defined as content posted to social media regarding your brand, such as posts on Pinterest, Twitter, Instagram, Facebook, and LinkedIn. This is also known as the most cost effective platform for PR.

Web media is a form of communication that uses audio, text, and visuals on the web. Some examples of web media are videos, photos, and graphics. It’s content you own by personally creating it. Some examples of owned content that are popular today include podcasts, websites, blog posts, and videos. Owned media can also be content your employees created as long as that content is put into a contract signed by both parties.

This is the media that your parents grew up with, and it’s still around today. Also known as traditional or even “old-fashioned” media, print media includes magazines, newspapers, books, and comics. In more recent years, print media is used with desktop publishing software and electronic book reading technology, such as the Amazon Kindle.

Other forms of media

Television is a form of entertainment that has been catching the attention of Americans for more than fifty years. Originally, there were limited options for TV channels, and audiences had to watch programs at a specifically broadcasted time. Now with streaming apps, you can watch a variety of movies and television shows on demand. Movies are the oldest form of entertainment; back in the day, you could only watch movies at the theater. But now with new technology, you can stream or rent movies to watch on the television, your phone, or the computer.

Video games have been available for purchase since the 1980s. Now with life-like graphics, advanced processors, and highly realistic simulations, you can feel like you’re in the game. If you want to learn how to reach a certain audience, video games are a great way to do this. Video games are promoted by the media, and they are targeted to specific audiences. A business can create a product for a video game that includes a message that targets mass audiences.

Amelia is an intern at Axia Public Relations for the spring 2021 semester. She will be graduating in April with a bachelor of science in public relations and a minor in digital marketing. Amelia has a passion for writing and a love of helping others and meeting new people.

Photo by Victor Xok on Unsplash