What are human interest stories and why are they newsworthy? 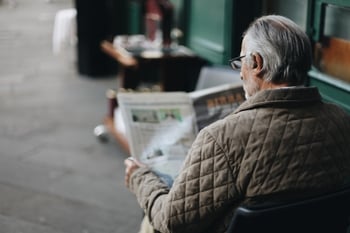 With much of the news consisting of timely, serious stories known as “hard news,” people can find relief in “soft news,” which covers topics like lifestyle, arts and culture, and human interest stories. While emotion-based human interest stories (also called features) may seem weak compared to fact-heavy hard news stories, they serve an important purpose in journalism and have great news value.

If you’re looking to earn media coverage for your company, it’s important that your story ideas are newsworthy. Newsworthiness is a factor newsrooms use to determine which stories to pursue and publish. A newsworthy story depends on important news values — elements of news that make audiences care about your story.

To make a soft news human interest story newsworthy, the key is finding a unique story or angle.

One of your employees may have broken the company record for the longest career, and that’s interesting to your internal audience. But think about how many employees at other companies are breaking the same records. That story isn’t unique, so it’s not newsworthy for a wider audience. But what if your employee breaks the world record for having the longest career at any company? This event is truly unique, skyrocketing its news value — which is why CBS News published a story about it.

Notice which other news elements that CBS story contains and which ones it doesn’t. That human interest story uses extremes and oddity to showcase its unique news value. You may notice that some of the main elements, like timeliness and proximity, are absent.

CBS published the story five months after the event took place, and while the story ran on a U.S. news network, the story’s subject is from Brazil. Human interest stories must demonstrate some news value aside from just being heartwarming, but keep in mind that uniqueness is a value that can sometimes outweigh other news elements.

Not every human interest story is heartwarming

While you might wrap yourself up seeking the classic human interest story, it’s important to remember that these stories can take more serious forms too. The purpose of a human interest story is to showcase the humanity of an event, whether that event is heartwarming or not. These stories can contextualize difficult-to-process, impactful events from a personal angle, helping news consumers understand the event in greater depth. This should generate an emotional response from the consumer, which can even mean sadness or anger.

The 9/11 terrorist attacks became one of the biggest news stories in American history. The hard news stories that followed could have been difficult for news consumers to process — what happened, the numbers of deaths and injuries, the attackers’ motive, and the country’s next steps.

While that information is crucial, stories about survivors may have stuck with you more than the specifics of the attacks. That’s because survivors’ stories are human interest stories that give context to news stories specifically about the event. Survivor stories are usually incredibly sad, and that’s the point. Experiencing emotions related to an event can help you understand the event better, which is why human interest stories are important and just as newsworthy as fact-based stories about an event.

Our founder and CEO Jason Mudd explains that no one reads a book, watches a TV show, or goes to the movies for entertainment to learn about a corporation, its fancy headquarters building, equipment, or assets. People want stories about people — the actual people inside the organization who made a difference.

A reporter can’t actually interview the company. The company doesn’t have a story to tell, nor does its four walls, equipment, and assets. It’s the people behind the company — their personalities, visions, struggles, odds they’ve overcome, mistakes, and accomplishments.

How to find human interest stories in your company

Your company likely has plenty of people with stories that would make compelling human interest stories, and it’s up to you to discover them! Newsrooms are selective, so you must be too. Search for unique stories about a person that contain other relevant news values if you want to earn media coverage.

This story about the chief artistic officer of the Lincoln Center of the Performing Arts from The Washington Post showcases how prominence can complement a human interest story. The Lincoln Center is among the most prominent performing arts venues in New York City, which adds news value to this story. If your company has prominence, its name could add enough news value to make a story about one of your employees newsworthy. The chief marketing officer at the Lincoln Center works at a prominent place and has an interesting job and story, so this combination makes her newsworthy.

This Wall Street Journal article blends descriptive language with fact to tell a compelling human interest story. The leading sentence gives the “who,” “what,” and “when.” It blends these with colloquial language — “and he’s just getting started” — which tells readers this isn’t a hard news story. When you’re pitching human interest stories, take a similar approach.

While it’s unlikely that the journalist will use your exact wording or storytelling in the published story, you have the power to set the story’s tone in your pitch, which journalists can build upon as they write. Writing a compelling lede that blends emotional and descriptive language can showcase the heart of your story and capture journalists’ attention, resulting in valuable media coverage for your company.

To learn more about pitching and building your relationship with the news media, download our e-book “Learn Media Relations from the Media” for our expert advice.