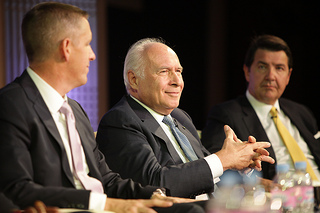 There’s a shakeup afoot in the public relations and marketing departments of the nation’s most successful companies. According to a recent study by the Council of Public Relations Firms (CPRF), PR professionals at companies appearing on Fortune’s Most Admired list report not to the marketing department, but to the “C Suite,” that is, CEO, COO and/or chairman. In fact, 63 percent of Fortune 500 companies, those raking in $6 billion in annual revenues, have their PR departments reporting directly to executive offices, as opposed to 42 percent of Fortune 20,000 companies, or those making less than $100 million.

And there’s more: Researchers uncovered an unmistakable pattern when comparing PR and cultural characteristics of Fortune’s most admired companies with others of similar size. They found that PR departments at Fortune companies by and large:

Giving PR a seat at the proverbial table pays off in easily quantifiable and qualifiable ways, according to a recent survey titled “The Value of Corporate Reputation.” CEOs surveyed say they increasingly are recognizing that their companies’ PR-pumped reputations are generating “hard” measures of business success. Among them are low employee turnovers, higher stock prices and greater credibility during crisis times. Seventy-seven percent of the CEOs responding say their companies’ PR efforts boosted sales and 61 percent say they’re able to attract better talent.

Even those companies that boast a few dozen in-house PR professionals see value in hiring outside PR agencies of record. Why? Survey respondents say outside firms provide strategic marketing insight, help offset the limitations of internal PR staff, offer an objective point of view, are less expensive and easier than hiring more staff and are able to quantify results.

For a full copy of the CPRF’s study, visit the organization’s website at www.prfirms.org.