Three tips to crisis response when customers have been offended

Who is visiting the school of PR hard knocks? OfficeMax

They know who we are. They know what we like. They know what we watch, and where we shop. (The companies we buy from, that is). That data in and of itself is be very useful for both companies and consumers. However, OfficeMax’s recent PR blunder demonstrates important lessons in the challenge of maintaining quality control with data, and shows how not to deal with a PR crisis in your organization concerning data.

In light of recent data problems from major companies, let’s get down to the heart of the matter from the angle of PR and responsibility.

When companies collect big data about their consumers, they have a responsibility to protect it and to use it in an appropriate manner. Sure, mistakes happen. We’ve all gotten a letter from a company addressed to us with an incorrect spelling of our names, or perhaps your two-year-old has received mail stating that his car is due for service. But when marketing is sent to a deceased relative, it doesn’t build loyal relationships. Worse, when it’s addressed to a customer and his “Daughter Killed in Car Crash,” it seems downright malicious – and outright irresponsible. 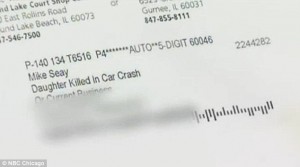 That’s what happened to Mike Seay when he opened the mailbox at his home in Chicago not long ago. There in the box was a letter from OfficeMax intended for Mr. Seay, but it was also made out to “Daughter Killed in Car Crash.” Seay’s daughter had indeed passed away in an auto accident one year prior. Not surprisingly, Seay fessed to NBC 5 Chicago that the piece of mail was incredibly hurtful because the loss of his daughter is still constantly on his mind.

The fact this information was stored in a database somewhere is not the problem. Legal representatives, for instance, might use this information to offer relevant services to someone in Mr. Seay’s situation. In fact, marketers use personal information collected about us every day to tailor offers, and many times, we benefit from such things as coupons and a more customized shopping experience. However, the death of this man’s daughter had nothing to do with office supplies or products.

How did OfficeMax fall off the track when it comes to PR and responsibility in a crisis – and what can you take away from it?

1. Do: Avoid denial. In this case, the company or its contracted vendor obviously sourced information from the wrong database when assimilating its consumer mailing list. Instead of accepting responsibility, the response was denial that such an error could have occurred.

When the customer has been wronged, it’s never a good PR response to issue a denial. Today there are hundreds of active social media platforms where customers will be glad to share their disgust. There are also hundreds of brand champions and pro bloggers who will do the same. A better response would have been to immediately assume the viewpoint of the consumer, and issue a prompt apology with steps toward making sure this doesn’t happen again. (Basics of PR crisis management).

2. Do: Accept responsibility. Upon realizing the mistake, the finger was pointed at the database vendor for the botch.

Buyers don’t separate customer service teams or sourced vendors as “distinct” from the brand. So when Mr. Seay called OfficeMax customer service to relay what had happened and did not receive an immediate apology, but instead disbelief, it was poor PR for the entire organization. In fact, it is often experiences with customer service that determine how we truly evaluate a brand. Instead, OfficeMax could have alerted their entire service team of the error and prepared a key message that reflected their efforts to make this right.

3. Do: Apologize quick, and steer the conversation in a new way. It was only after the media got involved that OfficeMax offered its “sincerest apologies.”

Whether or not the vendor made the mistake is irrelevant. The letter in the mailbox that day came from OfficeMax, and the customer could care less what happened behind the scenes. Once the media began sharing this unwanted earned news coverage, OfficeMax could have taken some key steps to shift the conversation – such as using video and social media to apologize, then explain how data is carefully received and handled with the customer in mind and they’re evaluating this to prevent it from happening again. They could also explain that the chief reason to pursue customer data in the first place is to better serve their audience with products and offers they want to make their lives better.

The true matter isn’t the use of customer data, but accountability itself – and what to do (or not to do) when customer trust and accountability has been breached. Axia Public Relations can help you put the strategies in place for crisis management to get the positive attention you want. Let us show you how today.

– Jason Mudd, APR, is CEO of Axia Public Relations. He is an Emmy-Award-winning accredited public relations practitioner, speaker, author and entrepreneur. His public relations portfolio includes work for established national and emerging brands such as American Airlines, Budweiser, Dave & Buster’s, Brightway Insurance, Florida Blue, H&R Block, Hilton, HP, It Works! Global, Miller Lite, New York Life, Pizza Hut, Ray Charles, Southern Comfort, Verizon and more. Connect with Jason at @jasonmudd9 and Axia Public Relations at @axiapr. Be sure to tweet and share your thoughts below. We’ll read and respond to each of them.