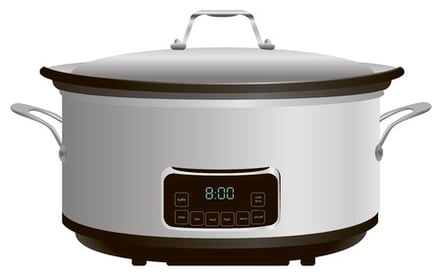 This week, NBC’s “This Is Us” gave viewers an emotionally gripping episode that seriously tugged their heartstrings. It also sent many to their cupboards to dispose of a kitchen appliance that was the terrifying catalyst for one of the show’s biggest tragedies. The villainous appliance? A Crock-Pot. 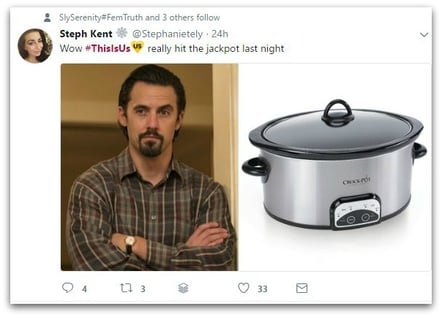 Upset fans immediately took to social media Tuesday night with comments, GIFs and memes suggesting that Crock-Pots are evil and we should destroy them all. 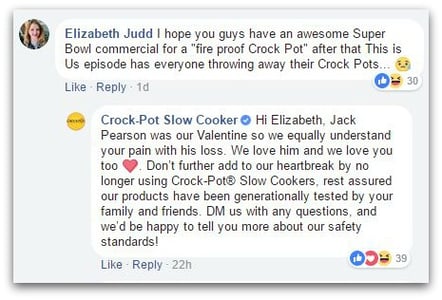 The pop culture backlash obviously sent Crock-Pot scrambling. To its immense credit, Crock-Pot took it all in stride and used both personality and tone to calm constituencies and turn a potential crisis into a well-played interaction with its public. 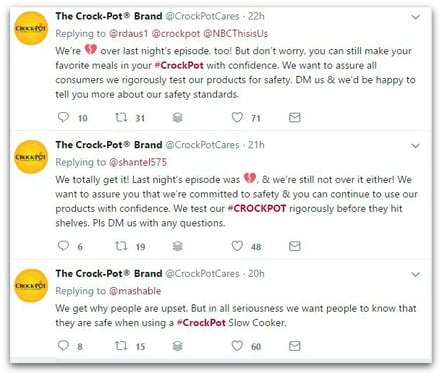 Should your company find itself in a similar situation (an unexpected crisis), use these tips to nimbly manage your communication roadmap, similar to how Crock-Pot did.

1. Meet your audience where they reside.

Social media is a direct link to customers and a way to highlight news and product wares as well as engage. Crock-Pot’s team did just that and did so with personality. The comforting, professional and thoughtful responses calmed the public and humanized the company. An “all-business” response likely wouldn’t have had the same effect and may have even fueled the fire (no pun intended). Even “This Is Us” creator Dan Fogelman used humor to connect. 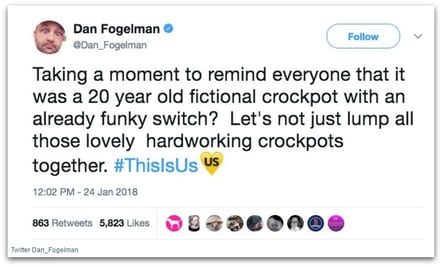 The “This Is Us” Crock-Pot fiasco has proven once again that today’s news cycle is most definitely 24/7, and that the diverse news channels follow vastly different guidelines. Where social media focuses on posts, responses, shares, etc., mainstream media braced for an official statement and executive interviews. Crock-Pot’s social media team invested hours in responding thoughtfully and professionally across various platforms until the PR team finished crafting an official media statement. There are unique nuances to public relations and communications, especially during times of heightened engagement (e.g., crisis). Knowing how to best communicate across all channels definitely delivers strategic advantage. 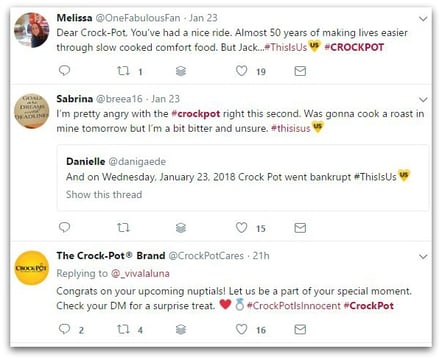 The uproar that emerged from Tuesday’s “This Is Us” episode had the creators of Crock-Pot both surprised and scrambling. Yet, the result was a crisis averted, thanks in large part to charismatic social media team members and a talented PR crew, who quickly coordinated responses, engagement and even a unique hashtag to support their efforts (#CrockPotIsInnocent). Crock-Pot effectively incorporated multiple communications disciplines to rectify public outcry.

To prepare for the unexpected, Axia Public Relations offers a number of complimentary guides on social media and crisis communications. Download your copies to keep on hand should something unexpected set your social media channels on fire overnight.