You can’t ignore bad news about your organization; and in fact, it deserves a proper response. Sometimes, even organizational leaders use their social media accounts to respond in the heat of the moment, and instead of putting out fires, they spark new ones.

Nothing blows up a Twitter feed faster than a Hollywood issue, which occurred when the leads for the movie based on the best-selling novel Fifty Shades of Grey were announced. The leads, Charlie Hunnam and Dakota Johnson, apparently aren’t what many fans of the book had envisioned for the characters of Christian Grey and Anastasia Steele.

The film’s producer, Dana Brunetti, is an active user of Twitter with more than 30,000 tweets to his name. He posted a very sensible tweet regarding the outrage, telling fans that “a lot goes into casting that isn’t just looks. Talent, availability, their desire to do it, chemistry with other acts, etc.”

But Brunetti also made a social media faux pas by clogging Twitter feeds with retweets from fans, some of whom he responded to in a slightly hostile tone: “There can only be one … and it is done.”

One of the best things a company – or film producer – can do when there is backlash across social media is to focus on the positives of a situation or a decision rather than retweeting negative posts with emotion-packed responses. (Ignoring social media trolls is also a helpful approach.)

Criticism across any audience channel, even the casual setting of social media, means there’s a problem somewhere and an opportunity to address it. Typically, the response should be made in the social media platform from which it is born – but any “hot” language should be left out of responses, which is why knee-jerk reactions are not recommended. Calm and clear wins.

Here’s another example: Hillary Clinton has a Twitter account with only 18 tweets, and nearly 750,000 followers. It’s clear that the politician must tweet carefully. She took some heat for misspelling Downton Abbey in an August tweet, which she wound up deleting, leading to even more backlash. Most recently, what seemed like an innocent congratulatory tweet to Diana Nyad for her successful swim from Cuba to Key West also turned into negative situation.

“Flying to 112 countries is a lot until you consider swimming between 2. Feels like I swim with sharks - but you actually did it! Congrats!” Ms. Clinton tweeted on Sept. 2.

I tweeted a simple and critical nugget of PR advice: “Don’t make it all about you.” Another person hashtagged the post “Humblebrag.” Ms. Clinton meant well, but her choice of words made her appear to be somewhat of an egotist.

Perhaps a more appropriately worded tweet would have included saying something along the lines of “I thought my job was difficult,” and then going on to congratulate the swimmer, rather than dropping the number the countries she’s traveled to AND that she metaphorically swims with sharks. A double brag.

The social media news cycle is incredibly swift. The public relations response must be just as fast, but appropriate. Companies get blasted on Facebook and Twitter constantly, and the response must be timely, sensitive and far from robotic.

Have you found yourself “swimming with sharks” in the face of a social media backlash? Contact Axia Public Relations today to talk about response strategies that can get you back to shore, fast. 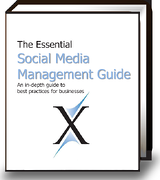 Get our ebook explaining best practices for all the most popular social media channels.