PRWeek has named Jason Mudd one of PR’s Ten Rising Stars ages 30 and under. At age 29, Jason gained PRWeek’s attention with his work for MPS Group. His extraordinary work earned the media coverage the firm had desired for a while. Tyra Tutor, SVP of corporate communications, stated, “I can’t imagine that any firm, large or small, could’ve gotten us as much coverage as he’s gotten us.”

Jason is honored to be one of PR’s Ten Rising Stars. He hopes to create a significant impact in the world of PR in the years ahead. The fact that his firm earned more than four times its revenue in 2005 than it did in 2004 along with his work for a large client shows that he is, indeed, a rising star in PR. 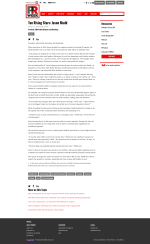