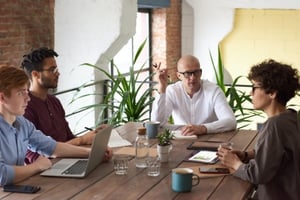 Creative processes usually involve multiple minds. This means one person’s ideas might not immediately sit well with another person’s.

What to do? How can other members of the creative team give their feedback on ideas?

Should they shut the idea down? Maybe condemn and dismiss it right away?

These options will, at best, be counter-productive to the creative process. At their worst, they’ll damage the confidence of the person who suggested the idea.

However, there is a much better option that supports creativity. This option, championed by Pixar, Walt Disney, and various notable brands, is founded on the notion that no idea is a bad idea. It is saying “yes, and” and plussing ideas to make the most of the expansive form of thinking.

Let’s examine the essence of saying “yes, and” and plussing ideas.

The benefits of saying “yes, and” and plussing ideas

As mentioned above, plussing leverages the expansive form of thinking. This makes for bigger, enhanced, and better-polished ideas because the ideas are not left in their original states. Necessary additions refine the ideas.

Variety is the spice of life. Isn’t that what they say?

While we all agree that ideation is the secret sauce for creativity, it didn’t get all that sauce just by itself. Saying “yes, and” and plussing ideas is the very core of ideation sessions. The expansive nature of plussing serves the purpose of ideation to come up with excellent ideas that push boundaries and challenge the status quo.

“Yes, and” as a response to a suggested idea looks for the good in every idea. Instead of instant dismissal, it makes room for the idea to be fed, polished, and refined to perfection. Additionally, plussing does away with identifying the flaws in an idea. For the moment, it turns a blind eye to whatever loopholes exist.

Another power of saying “yes, and” and plussing ideas is that it fosters a collaborative spirit. At the end of the creative process, it converts every idea from “my idea” to “our idea.” Thus, the output is considered a collaborative effort. This tremendously boosts the chances of the idea being approved when it moves through an organization.

These are the powers and benefits of saying “yes, and” and plussing ideas. In your marketing and PR efforts, never neglect how far plussing ideas can take you. After all, you need creativity for marvelous marketing ideas.

Photo by fauxels from Pexels