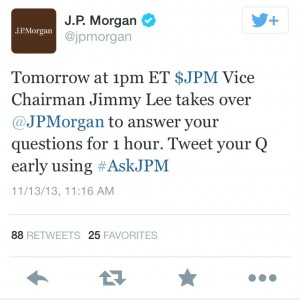 What do recent snarky Tweets to JPMorgan like “How do you decide which houses to foreclose on?” really mean?

They mean the retirement accounts of millions of Americans are still in a state of recovery after the recession, and many perceive big banks as a causal factor. Public perception among disgruntled workers is that banks got a government bail out, while many hard-working Americans put off retirement to make up for the losses.

And frankly, they mean social media strategy planners for JPMorgan missed the boat on this one.

JPMorgan is in the middle of the fury, particularly after a social media public relations tactic went haywire recently. Like many social media events, it started with good intentions. The hashtag JPMorgan public relations specialists had planned to use during a Twitter question and answer session (#AskJPM) was taken over by bitter users to slam the company. Some high-profile journalists, columnists, editors and bloggers also got into the mix, including Salon’s David Dayen who asked “who does #2 work for?!” Some of the tweets were quite comical: “Do you like puppies?,” asked Bloomberg’s @matt_levine. “If you had a puppy, what would you name him?” Others were filled with a little more venom: “How do you decide who to foreclose on?” asked @reftpt. “Darts or a computer program?”

Even alongside recent headlines of JPMorgan’s $13 billion settlement with the government for bad mortgage loans – the largest ever – public perception of banking is at a critical phase. Being on the public relations side of a big bank has got to be one of the toughest PR jobs in the industry, yet that doesn’t excuse overlooking the current public perception toward the brand.

Many Americans feel that bankers didn’t get their due; they want to see the government hold them responsible for the financial collapse. PR experts all over the U.S. are asking what JPMorgan’s team was thinking by using a social media tactic with the hashtag #AskJPM. As the New Yorker reported last weekend, one PR manager asked, “Do you have any self awareness?” Daily Beast editor Daniel Gross said on Twitter that the #AskJPM PR debacle will not soon be forgotten, and “will go down as a case study in corporate use of social media.”

It’s obvious that social media can be used to tear down as easily as it is used to build up an online reputation. While public relations professionals are finding social media to be an outstanding outlet to establish relationships with everyone from journalists to prospective customers, some are learning the hard way that social media campaigns take careful thought, strategy and analysis – especially concerning the mindset of the audience.

As noted in the Los Angeles Times, JPMorgan did manage to respond with a mild dose of humor in the midst of heavy sarcasm. Their Tweet six hours after the comments started flying: “#Bad idea! Back to the drawing board.” Still, the damage was done.

Lessons learned: The climate of the audience and the state of the relationship with them must be considered carefully before any planned social media event is carried out. In the online reputation realm, audience members want transparency, a connection to (or at least a validation of) shared values, and attempts at a genuine relationship before they value an event like a planned Q&A. Things go viral quickly across social media channels. There is great potential for comments about a company to generate big attention and reach large audiences, but companies must also be prepared to respond when things go south.

Have you found yourself in the middle of a social media snafu? Are you wondering about the pulse of your audience as you consider an online event for your brand? Contact Axia Public Relations today. Let’s talk about a solid strategy for online reputation management before things get snarky.