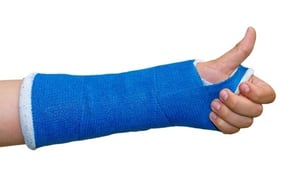 Football fans across the nation found themselves riveted last week by a digit. It was a strange deflection from the anticipated rivalry set to play out this past weekend as the New England Patriots took on the cinderella Jacksonville Jaguars.

What does a thumb have to do with public relations you may ask?

Tom Brady, widely recognized as a superior athlete, Gisele’s husband and first string quarterback for the New England Patriots, injured his thumb during a practice prior to the scheduled playoff game. The injury itself isn’t really the news. How the injury became news is.

Questions about whether or not Tom Brady’s thumb injury would sideline him from the playoff game became headline news. After two cancelled press conferences the week of the injury, Mr. Brady finally took the podium on Friday to respond to questions, wearing red gloves on both hands. With each question relating to his injury, Mr. Brady evaded his interviewer like a gazelle chased by a lion. He bobbed and weaved with phrases like, “I’m not going to talk about that.” When asked if he expected to play on Sunday, he responded, “We’ll see.”

Was Brady’s unexpected injury the key to a unique PR strategy? I would vote, yes! The media and fans voraciously consumed any report, article or post that offered details about Brady’s thumb or expectations for the playoff game. By Sunday, the skies cleared as Brady took the field and the Patriots earned yet another victory on the path to the Super Bowl.

The takeaway from the Brady thumb incident isn’t that he recuperates well from injury. It’s that the unexpected, when you package it properly, can earn amazing PR results. Consider these tips when you really want to get mileage out of your press activity:

With the short attention spans of most people, focus on something that has brief and impactful shelf life. Think of limited versions of cars, beverages, etc. We all knew that come Sunday, Brady would either be playing on the field or cheering from the sidelines. The five-day pregame news hype played to the Patriots’ advantage by creating both media headlines as well as a potential psychological edge. Well played, Pats.

Brady arrived at a live news conference wearing red gloves. Even for fashion-conscious Brady, that was an unexpected move. Rather than arriving with a bandaged hand, he showed up wearing practice gloves. An attempt to avoid questions? Probably not. A way to counteract potential inquiries? No way. A tactic to keep focus on the Patriots? Perhaps. Eyes remained riveted on those gloved hands for days, further fueling media and online inquisition.

The playoff game was no doubt exciting, yet whether intentional or not, the Patriots somehow maintained a lion’s share of news coverage, all because of a thumb. Or, perhaps, because one very smart organization leveraged that thumb. Do you have a press conference in your future? Want to know how to make the most of it? Watch Axia Public Relations’ media and spokesperson training webinar to learn techniques to help you become downright unforgettable, just like Brady’s thumb.