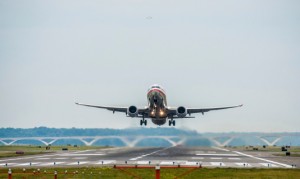 Many of us are connected to our gadgets and smartphones as if by some sort of umbilical cord. Now we can continue using them throughout a flight, virtually uninterrupted. This in itself says a lot about our constant need to connect, but what does this change in airline policy mean for airlines, the publishing industry which stocks the magazines and companies like SkyMall?

Recently, the actress/comedian Charlene deGuzman created a short film that perfectly depicts how tethered smartphone users are to their devices. In the film, deGuzman bowls a strike, seeks a high-five and comes up empty due to all of her bowling buddies being glued to their smartphones and missing the roll; a peaceful mountaintop yoga experience is ruined by a man screaming into his cell phone; ladies enjoying what appears to be mimosas interrupt the experience to take selfies. We’ve all seen it happen and many of us with smartphones (which, according to the Pew Research Center, is around 56 percent of adults) are guilty of reaching for the smartphone at inopportune times.

The commercial flight was perhaps one of the only places where we were made to turn off our devices and focus our energies elsewhere. Prior to the decision shift, if you were really into your game of “words with friends” and refused to turn off your phone, you would be escorted off the plane (Alec Baldwin is apparently quite the word puzzle fiend). The Federal Aviation Administration (FAA) finally eased up on the rule regarding electronic devices, so now we can all play on.

How did the decision come about? Michael Huerta, FAA administrator, announced at the end of October that, after gathering input from the mobile technology industry, pilots, flight attendants, passengers, aviation manufacturers and the airlines themselves, it would be safe for passengers to have the freedom to talk on their phones and use their devices through the entirety of the flight.

With more than 600 million passengers boarding domestic flights on an annual basis, one has to wonder how this change in the rules will impact the publishing industry. Previously, when passengers couldn’t read the news on their devices on commercial flights, they were relegated to purchasing a magazine or newspaper for entertainment. SkyMall’s magazine, which offers a range of unique personal care and gift products, is crammed into the back of every seat. The placement there really works: SkyMall pulls down roughly $100 million in sales per year.

What can SkyMall do? Perhaps it could heavily promote a savvy new app that is somehow connected to airline information and entices viewers to browse. Perhaps it could continue onward in print format and evolve its inventory to reflect the interests of audiences who fly, and those who don’t rely as heavily on electronics – such as a portion of Boomers. Or, it could embrace the situation with humor and start providing back-of-door holders for its magazine in other areas, like stadium restrooms (ew!). In any case, SkyMall should send a message and start curating a conversation about the matter.

Another thought: FAA’s easing up on the electronic device restriction could be another nail in the coffin for print newspapers, magazines and in-flight publications in general. Many people, especially the Millennials, are reading their books and magazines on e-readers and iPads. The growth of Audible, which topped $110 million in annual sales way back in 2008, is proof that more and more Americans are dropping their paperbacks and experiencing their books through their mobile electronic devices. Publications will certainly need to continue innovating and adapting, and quickly.

Aside from the effect on the publishing industry, how do you think you’ll enjoy your next flight? Will the once-quiet flight be a cacophonous nerve rattler? Flight attendants don’t have a problem with you working and playing on your phone. Most don’t even mind that you’ll be engrossed in your Facebook and Twitter feeds while they’re showing you how to clasp your seatbelt. What they do worry about is, with everyone yapping on their phones at the same time, will the din be at such levels that passengers become discourteous and raise their decibel levels to compete with the people around them? Nobody wants chaos and frustration to be the pervasive elements in a metallic tube, full of people, a mile in the sky.

Hmm… Where is Bose during the rise of in-flight chatter? Sound-proof headphones, anyone? With smart and creative PR, there’s an opportunity to overcome every challenge. What’s at risk in your company? How might new technology reduce sales? Contact Axia Public Relations today to cut through the clutter in your industry and speak in a voice that’s right for you and your audience.