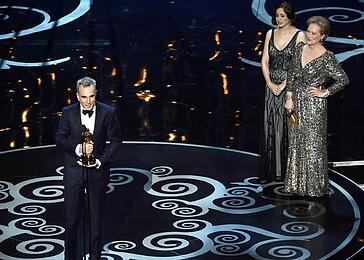 He does all these awesome things for Hollywood actors. He endows them with creative genius, gives them access to hundreds of millions of dollars to express their creativity, blesses them materially and personally—many with beautiful faces and bodies—and yet, what thanks does He get? Does God need new PR representation?
Nathaniel Rogers and Chris Kirk writing for Slate, crunched the numbers on who gets thanked in Oscar acceptances speeches. The title of their piece says it all: “Meryl Streep Gets Thanked More Than God.” Rogers and Kirk note that over the past twelve years, 47 actors have given acceptance speeches at the Oscar ceremony. Analyzing who got thanked in each speech, they discovered that God was number 15 out of 17 categories, beating out only “Cast and Crew” and the “Role Portrayed.” Pretty dismal.
Leading the list of the objects of gratitude were:
1. The industry
2. Other
3. Producer
4. Co-star
5. Director
6. Family.

Women more often than men thank those who gave them their start in the business. Agents fight for top billing, and seldom get it.
Most actors end thanking a loved one. Maybe someday more actors will love God---and He'll get more thanks on Oscar night.

By Dr. Larry Poland
Mastermedia International
Larry W. Poland, Ph.D. is chairman and founder of Mastermedia International. Dr. Poland has had an illustrious career in higher education, international volunteer service, and in consulting to decision-makers in the entertainment industry. He has been a college president, written seven books, placed volunteers in 35 nations, traveled to 100 countries, and founded two schools and a radio station.