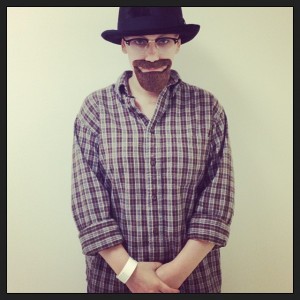 University of Southern California student Rachel Cope (@rachelmcope) knows ideas and information have the ability to spread like wildfire when they reach the right network of people on any social media channel. With that knowledge, she recently harnessed Twitter to share her unique Halloween costume with her followers.

Rachel is fighting non-Hodgkin’s lymphoma for the second time. Although she spent her Halloween receiving chemo treatments, that didn’t stop her from celebrating the holiday. A big Breaking Bad fan, Rachel decided to dress up as the main character, Walter White, who is played by Bryan Cranston and who, on the TV show, was also battling cancer. Rachel had photos snapped of her in the hospital room and posted them on all of her social media channels, including Twitter.

Tweeting to the Breaking Bad cast and crew in her posts led to a retweet and direct message from Aaron Paul (@aaronpaul_8) who plays Walt’s apprentice, Jesse. 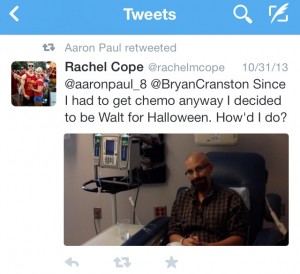 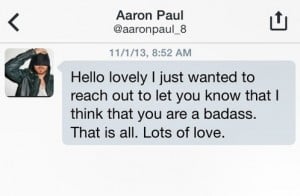 In the days and weeks following Aaron Paul’s retweet, friends and strangers reached out to Rachel to congratulate her on the recognition and give their well-wishes. But Rachel was in for one more even bigger surprise.

One of the Breaking Bad writers, Moira Walley-Beckett, contacted Rachel and asked for her email address – she said she was planning something fun. Moira’s assistant then contacted Rachel asking for her phone number, but didn’t mention why.

A few days later, Rachel got a call to her hospital room phone – it was Bryan Cranston, Walter White himself.

Rachel talked to Bryan for 15 minutes, mostly about Breaking Bad and particular scenes where Walt wouldn’t allow his cancer to define him. For Rachel, that’s what she’s done all along. She underwent her second stem cell transplant and has been in the hospital for more than a month. Nevertheless, she still keeps up with USC football, rooting for the Trojans, and living her life, never letting the cancer she fought off once already define who she is.

At the end of their conversation, Bryan congratulated Rachel on being such a fighter and told her to “be well.”

Like Rachel, companies can use social media to build an audience and share their stories. Social media may seem frustrating with the tweets, retweets, shares, likes, etc. It only takes one person, one retweet, one share to get the PR ball rolling and start the rippling effect. For a company to be successful, it needs to get a grasp on social media by sharing its successes and media coverage with its followers. That’s the goal of a great public relations campaign: to tell a story to a large number of people.

Rachel’s story is only one very compelling example of the power of Twitter. Reaching out to celebrities, reporters and people with large followings isn’t a new technique. However, knowing whom to contact and getting the information to the right people is key.

Although Rachel wasn’t using Twitter as a PR stunt, she still knows the importance of social media. She uses different channels to keep friends and family in the loop about her procedures and day-to-day life. Ultimately, that led her to the experience of a lifetime.

A true USC fan and student, Rachel’s living the USC motto: “Fight on.”

If you want to keep up with Rachel and her fight, check out her blog: http://rachelgoestocali.tumblr.com 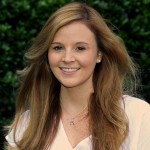 – Darby Underwood is a PR associate at Axia Public Relations. She graduated from the University of Florida in May 2012 with a Bachelor of Science degree in telecommunications with a news focus. She’s been on the Axia PR team ever since. Follow her on Twitter @DarbyUnderwood.