Bad PR: A Case Study in How Not to Manage Your Online Reputation

"Any man who must say 'I am the king' is no true king at all." — Tyrion Lannister, Game of Thrones

If your first impulse upon reading a negative online review is to respond with questions about the reviewer's intelligence and family lineage, you're human. If you actually do it, you're playing with fire and your business is likely to get burned - possibly to the ground.

Make it a habit and you'll need professional help to douse the flames and start rebuilding.

When it comes to professional help, the last thing you need to hire is a flamethrower.

Those are lessons Amy and Samy Bouzaglo, owners of Amy's Baking Company in Scottsdale, Ariz. are learning the hard way. Last month their online reputation problems morphed into a full-blown crisis when they appeared on celebrity chef Gordon Ramsey's Kitchen Nightmares, where Amy's earned the dubious distinction of being the first restaurant the 14-Michelin-Star-holding chef had ever declared beyond help.

The Bouzaglos' problems began in 2010 with a negative review on Yelp from a customer unhappy with both the food and service. Rather than use the negative review as an opportunity to build goodwill, Amy Bouzaglo chose to go on the attack:

"...it is summertime in ARIZONA MORON!!! Only TRAMPS and LOSERS want to sit outside ... Do US a favor and keep your ugly face and you ugly opinions to yourself."

Bouzaglo posted her response as a 5-star review, but what followed was a series of 1-star reviews from other unhappy customers. When The Phoenix New Times reported on the exchange on its food blog, Chow Bella, things only got worse for Amy's Baking Company. By the time the Bouzaglos agreed to appear on Ramsey's restaurant rescue series, the couple were engaged in an online war with reviewers on several popular websites, including Reddit and Facebook.

Apparently believing that Ramsey would vindicate their position — and their food — and rescue their restaurant from the damage done by negative reviews, the Bouzaglos agreed to let him position cameras throughout the dining room and kitchen and to film their interactions with customers and staff.

What the cameras captured included Samy Bouzaglo shouting profanities at customers and confiscating his wait staff's tips and Amy verbally abusing and then firing a teenaged food runner when she asked an innocuous question.

When Ramsey confronted them about problems with their service and food, which was undercooked and included frozen entrees that Samy Bouzaglo represented as freshly made, the Bouzaglos were in denial. The problem, they insisted, wasn't them, but the mean "Yelpers" and "Reddits." They were so deeply in denial that Ramsey walked out rather than help them turn their business around — a first in his long-running series.

When the show aired in May, viewers responded by inundating the restaurant with 1-star reviews. What followed was like gasoline on a fire. Profanity-laced posts written in all-caps appeared on the Amy's Baking Company Facebook page attacking reviewers. Even innocent sounding posts asking if the restaurant was accepting reservations were met with name-calling. The Bouzaglos appeared to be suffering one of the worst Internet meltdowns ever recorded.

By the following evening, cooler heads had prevailed and the Bouzaglos began damage control. The following post appeared on Amy's Facebook Page: 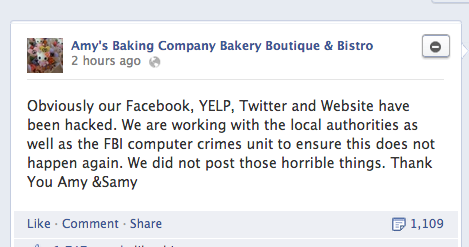 But when a local news crew arrived to ask about the Facebook posts, Amy Bouzaglo told them they were not allowed to film her and were trespassing. Then the restaurant closed for several days.

The Bouzaglos hired Jason Rose to handle their crisis PR. Rose, who has also represented Maricopa County Sheriff Joe Arpaio, has experience dealing with social media blunders — his own.

In 2011 he published a post on Twitter in which he derisively used the phrase "special ed" to describe people sitting near him at a sporting event. Rose later apologized, but leaders at Special Olympics Arizona cited a zero-tolerance policy and fired him and his firm.

According to newspaper accounts at the time, Tim Martin, the CEO of Special Olympics Arizona, had this to say:

"He wants to make an effort to make this right in the future -- it was very obvious in talking to him that he was very sincere about how he didn't realize the impact of what words can mean to people."

It's difficult to imagine a public relations professional who doesn't realize the impact words can have on people, but Rose might have seemed like a good fit for the Bouzaglos at first. Then a planned press conference was cancelled, reportedly due to legal threats from Ramsey's producers, and guests arriving for the restaurants "grand re-opening" were met by a locked door and turned away by Samy Bouzaglo, who blamed his PR firm for the mix up.

A few days after Amy's Baking Company actually reopened, Bouzaglo threw reporters from the Phoenix Business Journal out of the restaurant after they complained about receiving three martinis in a row with flies floating in them.

Never tell yourself it can't get any worse.

Thanks to a series of bad decisions, Amy's Baking Company's reputation crisis became a full-blown business crisis that threatened the restaurant's survival. But the fallout didn't stop there. The owners' war with the public is having personal repercussions for the Bouzaglos.

It appears they may have violated the Fair Labor Standards Act when they confiscated their employees tips — something Samy Bouzaglo admitted on camera to Ramsey but now denies and an online petition started by an angry viewer is pressuring the federal government to take action against the restaurant. Additionally, both Bouzaglos' criminal records, which include prison stints for both of them, have been widely reported. Now news outlets are reporting that Samy Bouzaglo is facing possible deportation for failing to disclose certain things about his background to immigration officials.

The saddest part of the entire saga is that it could have been easily prevented.

If only the Bouzaglos had responded to that first Yelp review with, “I’m sorry you had such an unpleasant experience. Our customers’ satisfaction is our highest priority and I’d like to personally see what I can do to make sure this never happens again. Please call me at your earliest convenience so I can make this right. Amy. 202-555-1212.”

Get a subscription to Axia's 60 Second Impact, our monthly newsletter packed with valuable tips for using PR to promote and grow your business and we'll throw in a ebook: