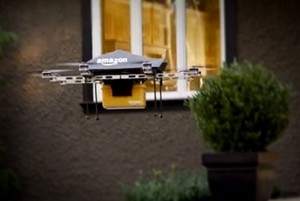 As a pubic relations professional, I love it when PR/news goes viral. It takes planning and perfect timing for a brand to go viral; Amazon pulled it off to perfection Sunday night.

Whether or not you believe it will happen or if you agree with it, Amazon’s coverage on 60 Minutes about its idea to deliver packages using drones within 30 minutes of order completion has generated a significant amount of buzz. The drone, known as Amazon Prime Air, will not only be unmanned, but it will be fully automated and will only require input of GPS coordinates. It will supposedly fly to the location, deliver the package and fly back all on its own. The drones are able to carry five pounds for 10 miles, which would cover 86 percent of Amazon’s sales. It’s like a science fiction movie coming to life. Unless you have been living under a rock, there’s no reason why you wouldn’t have heard about this.

The brilliance behind that public relations program is outstanding.

It was an incredible public relations stunt: It was just in time for Christmas, on the eve of Cyber Monday. The story went viral as every major media outlet in the nation picked up on it in near real time. It created a social media storm as news of the story traveled fast via viral social sharing. I caught it on my DVR behind the rest of the nation; as soon as I finished watching the story, I had to stop and share it, too. From there, I received several comments from my friends, colleagues and followers. (We men like our gadgets.)

The PR move also had almost no chance of blowback. It was made very clear that this drone would not be a company standard for a few years due to the need for more testing and approval from the Federal Aviation Administration. Amazon can’t be proven wrong because the concept itself was mostly hypothetical. There was no actual flying of the drone, as a pre-made video clip was played on the 60 Minutes program, so no mishap could ruin what Amazon was trying to achieve. It was all buzz and hype, which directly translated to social media.

The scope of the story was very large. According to Axia Public Relations and Thomson-Reuters research, there were more than 2,700 stories written about it, which reached a total audience of more than 5.17 billion people. It had a total publicity value of more than $95.6 million.

I tip my hat to Amazon.com and its brilliant public relations strategy of partnering with 60 Minutes on the eve of Cyber Monday, putting the company top-of-mind with consumers across America. The strategy seemed to work as IBM reported that at 3 p.m. on Monday, total Cyber Monday sales had already increased 19 percent from 2012. ChannelAdvisor released numbers showing that as of 6 p.m., Amazon’s sales had increased 44.3 percent over the year before.

The story was great for more than just Amazon’s sales, too: It solidified the company as a pioneer of the future. Amazon wants to bring products to our fingertips (literally!) and refuses to wait around for someone else to work out the technology and logistics. Society’s fascination with space-age gadgets and fast, convenient service means it will change the way it looks at Amazon forever. Amazon’s brand and reputation have been positively changed because of just one interview. Isn’t that fascinating?

Not only was it brilliant for Amazon, it also seems to remind people of the quality of journalism that is taking place on 60 Minutes, your grandparents’ news magazine show. I’ve enjoyed watching 60 Minutes for decades and I always make sure I catch it. Now others are also reminding themselves that 60 Minutes is worth watching.

Now, this is PR at its best, and it can work for your brand, too. Give us a call; let's talk about the power of PR for you and your company today. We would also love to know your opinion on Amazon’s PR move and this story in general, so leave us a comment.