3 ways to use the mere-exposure effect for maximum impact 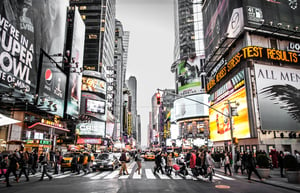 How do you feel about the teller who usually waits on you at your local bank? What about the characters on your favorite television show? Chances are, you feel that they’re trustworthy people you’d like to be friends with – even if you don’t know their real names. This sensation actually has a name; it’s called the mere-exposure effect. Learn more about it and how it can help your company.


When something becomes familiar to you, you begin to like it more and more. Perhaps you’ve heard the phrase, “It grows on you.” Think of that song on the radio that plays over and over. You might not have liked it at first, however, after hearing it a few times, you think it’s not so bad. That’s the mere-exposure effect. The impact applies to companies as well. Learn how to capitalize on it to increase your visibility, brand, and profits.


What is the mere-exposure effect?

The mere-exposure effect, or the familiarity principle, is a psychological phenomenon that makes people feel a preference for a person or thing simply because they see it often. For example, you may encounter the same person at your neighborhood bakery and begin to feel a connection to them, although you’ve never exchanged a word to each other. According to numerous researchers, including the American Psychological Association, we start to think of people and things more favorably the more we are exposed to them. Surprisingly, this feeling has no basis in logic or fact.


How can you use the mere-exposure effect for your company?

Don’t overdo it. Some companies learn of the mere-exposure effect and think the way to take advantage is to bombard everyone with their images and messages. Research demonstrates that it works best when you give the information time to soak in. Also, as discovered by psychologist Robert Bornstein, after 10 to 20 exposures, the effect seems to decline, like that song you are now sick and tired of. This means your messages must be properly timed and coordinated to be most effective.

There is a reason why you see the Nike swoosh and the red, white, and blue globe from Pepsi splashed on everything they do. People remember symbols, even subliminally. Hundreds of published experiments have proven the effect time and again. This is perhaps the strongest incentive for your company to have a unique, powerful, and recognizable logo. If you don’t have one already, you need to make this a priority. Then, put it everywhere, from sponsoring events to social media posts.

The mere-exposure effect is not applicable for all groups. For instance, kids and younger adults tend to reject things that are familiar, thinking of them as old-fashioned. They want things that are new and innovative.


3. Hire a top-quality PR agency to help you.

At Axia Public Relations, we’ll help you navigate the aspects of the beneficial yet sometimes confusing concept of the mere-exposure effect. Our team will help you develop a strategic approach for this principle to increase conversions, build your brand, and get a jump on the competition. To learn more, contact us today or download our complimentary e-book “Maximizing Your Public Relations Investment.”