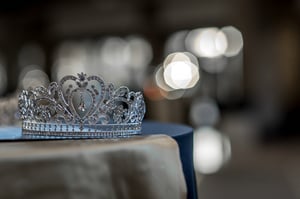 When I started competing in pageants at the age of 16, I had no idea the skills I would learn and the professional development I would experience. I was initially drawn to competing because I thought it would be a great opportunity, and I’d get to dress up and have my hair and makeup done. Then, I figured I’d take the crown home, having completed my duties. That couldn’t be further from the truth.


I didn’t even begin to understand the effects of media relations, let alone public relations, when I started in 2012. However, looking back, I was learning about the media aspects of PR without realizing it – or realizing how beneficial it would be in my future.


Part of being a titleholder is also being an advocate for the community and being philanthropic. I spent a lot of time advocating for my platform of encouraging education in youth. During my reign, I read to children in classrooms, volunteered at back-to-school events, and attended school board and county commissioner meetings.


At the time I was participating in pageants, I didn’t know I would go on to study public relations or that I’d have anything to do with the media and social platforms in my career. Now, I am thankful for my past experiences and rely on them to understand the position I’m growing into.


Earned, shared, and owned media are the major avenues I had the opportunity to explore.


Community involvement and people stories are the core of earned media. It’s all about what contributions you make that get your name out there. I would say 98 percent of the times my name appeared in a news story or within my pageant system, it was for my community efforts and volunteering.


Owned media played an important role in my daily responsibilities as a pageant titleholder. I posted frequently about the events I was attending and the tasks I was completing that related to my title or my platform. Facebook was the platform I devoted most of my time to and had the biggest following on. Photographs and videos resonated really well with my followers. In my studies, I’ve learned Facebook is a major player in the social media aspect of PR. That was something I was already doing back then and, again, didn’t realize the impact I was making.


I also refer to Facebook for my experience in shared media. It’s all about engagement, and Facebook is the platform where most of my conversations happened, whether they were about the events I volunteered at, my next competition, or advice I gave to girls starting in the industry. I didn’t have a Twitter account for my title, and looking back, I think it would have been beneficial.


People don’t understand that PR is everywhere, and without even knowing it, we’re all participating in earned, shared, and owned media. Although, I didn’t have much paid media experience, many positions do provide this opportunity. If I had realized back then the professional skills I was developing, I would have paid even more attention. I recommend every person, in every position from salesman to CEO, take a look at their contribution to media relations – for themselves and for their company. It’s incredible once you realize how much you already know, and how you can apply it to the future.


Axia Public Relations offers a terrific resource, “The Essential Social Media Management Guide.” This complimentary e-book provides in-depth instructions on getting your company started on social media and the best tips to build relationships with your target audiences.

Featured photo by Church of the King on Unsplash