Learning from the media

What you should know

Recently, journalists from the print, TV, radio, and magazine world attended a “media mashup” professional development event for those in the PR industry, which the Florida Public Relations Association hosted. These professionals all understand that getting the media’s attention isn’t as easy as one may think. Even with the 24-hour cable news cycle and social media, it can be a huge challenge to get your story the coverage you believe it deserves. That’s why it was so eye-opening to take a day to stop and listen to members of the media and learn the secrets to getting them to pay attention to you and your company’s message.

During a panel called “Are your press pitches working?” we listened to representatives from newspapers as well as radio and television programs that produce content daily as they discussed the most effective strategies for pitching news stories. Here are some of the top tips and tidbits we learned from the media that you may not know:

During his presentation at the event, the President of Daytona International Speedway, Chip Wile, offered a unique perspective on working with the media. Before taking the reins at the iconic speedway, he spent 10 years in public relations. His key advice on pitching stories: “You can make a story out of anything.” Get creative. Think outside the box.

When he took over at Daytona, Wile helped turn a $400 million construction project (overhauling the racetrack) into 8,000 media stories, netting 1.4 billion media impressions over a four-year period. How? He made it personal. He made a construction project exciting by finding the personal stories to tell. One of the most memorable was when he invited the oldest fans of the racing sport to become “Fans of Steel.” Twenty of those fans signed their names to a steel beam that became part of the renovated racetrack. Each fan became a compelling and personal story to the media.

After a rainy morning spent listening to advice, shaking hands with members of the media, and taking the first steps in what will hopefully become meaningful professional relationships, we walked away with a renewed sense of direction when it comes to grabbing the attention of the influencers in our industry. 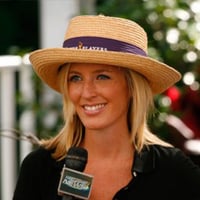