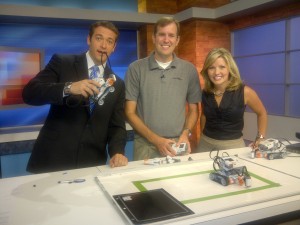 WJXT Weekend news anchor Jason Law and weekend Metorologist Rebecca Barry compete to see who can assemble their robot the fatest. Brian Knight, CEO of IT company Pragmatic Works seen in the middle prompted the challenge, which is similiar to one kids do in the company's free summer camps.

The challenge is similar to one kids do in the IT training company's free summer camps.