Josh Railey was leaving a restaurant when he saw a car on fire and, without hesitation, ran to the car and rescued the baby. This campaign helped spread his story to media outlets to millions of people and show SMART Financial’s influence on the community. His story appeared on more than 100 CNN affiliates and 58,000 social media interactions, and earned him recognition as an American Red Cross 2021 Red Cross Hero.

Josh, a SMART Financial employee, was celebrating his birthday dinner with his girlfriend, and upon leaving the restaurant, he saw a car on fire. He went to help and saw a woman screaming that her baby was trapped in the car. Josh rescued the baby before the car was fully engulfed in flames. His heroic story needed to be heard, so SMART Financial launched this campaign. 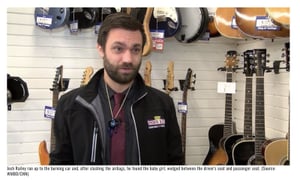 Because of this campaign, millions across the country heard Josh’s incredible story. The story: