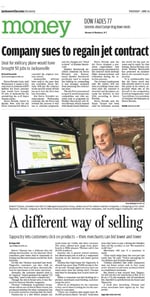 Tappocity, a bargin shopping website that shares revenue with purchasers, reached out to Axia Public Relations for effective public relations that could get the brand launched. Through the campaign, Axia introduced Tappocity to important audiences and critical resources such as consumers, manufacturers, consumer electronic suppliers, private equity and retailers. All of these resources helped to build consumer and merchant knowledge of Tappocity. Shortly after the start of the campaign, Axia earned Tappocity coverage in the top e-commerce publication, Internet Retailer, as well as coverage in Businessweek, Yahoo, EcommerceBytes and local media coverage in its home city. Such coverage attracted new consumers, merchants and investors to Tappocity and its sister companies.

Tappocity CEO Robert Thomas had come to Axia Public Relations looking for a public relations agency with veteran experience and knowledge of the technology and e-commerce industries. Having just come out of a bad relationship with a poorly performing PR agency – wasting valuable dollars in the process – Thomas understood the importance of having an effective public relations agency that could get the kind of earned media coverage his company needed.

“It really became apparent to us that Axia knew what it was doing,” said Thomas. “At the end of the day, Axia really was the right PR firm for us.”

Axia’s close relationship with both industry trade and consumer media outlets would prove vital in crafting a plan that would quickly deliver the kind of visibility and credibility all growth-aspiring companies require. In Tappocity’s case, Axia focused on spreading the word of a brand new and innovative form of e-commerce – one where merchants would have to bid on who could deliver the lowest price, essentially placing the power of price control with the consumer. Axia introduced Tappocity to important resources such as vendors, manufacturers, private equity and retailers. In addition, Axia’s reputation gave the startup additional credibility and ensured its ability to launch and subsequently grow even faster.

Axia definitely has the right resource, the right contacts and the right clout in the industry to really propel your business to the next level.”

Just two days after beginning the campaign, Axia landed Tappocity coverage in the top e-commerce publication, Internet Retailer. More followed soon after, including articles in Businessweek, Yahoo! and EcommerceBytes. Axia’s ability to deliver quickly on its promises to clients has Thomas wanting to carry on the success he had with Tappocity into several of his other technology ventures.

“Axia will be our public relations agency of record for any Internet property that we will have in the future, as well as any properties that we have right now,” said Thomas.