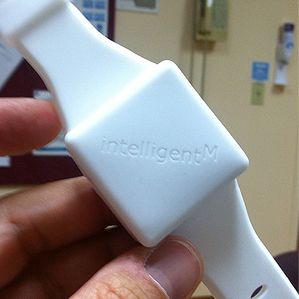 Utilizing a twist on RFID technology, IntelligentM’s “SmartBand” offers hospitals the ability to monitor and improve the cleanliness of each individual health care employee on a 24/7 basis, something simply not feasible previously. In an environment where 70 percent of health care-acquired infections could be reduced or eliminated through proper hand hygiene (instead of costing the industry $35 billion annually), the potential benefits of such a device are tremendous. Yet a great idea does not necessarily translate into a marketing success if relevant audiences are unaware of its existence. Mindful of this fact, IntelligentM sought out a public relations agency that could draw media attention, and that also possessed the technological prowess to discern and target the audiences which could best propel the concept to industry-wide recognition, approval and adoption.

When innovators at IntelligentM devised a cutting-edge method to ensure complete compliance with hand hygiene guidelines at health care facilities, company officials soon realized they had an industry-transforming concept on their hands.

With its good rapport across multiple media platforms, Axia’s experts could effectively deliver IntelligentM’s message to prominent trade outlets in print, television and online/blogging circles. Axia also used its influence with the general media to inform the public at large about the existence of such an essential life-saving device and why its use should be required in all health care facilities. To ensure maximum exposure and visibility to both consumers and businesses alike, these tasks were equally performed at both regional and national levels. In a matter of weeks, Our past experience in working with tech startups proved to be highly instrumental, leaving IntelligentM with the confidence that when it came to selecting Axia, they had made the right choice.

Axia friends... Wow! Not sure what to say except ‘Wow!’ You guys have certainly blown me away in two weeks!”

company’s message reached influential members of the professional medical community (its main target audience). With favorable coverage in media outlets such as Med City News, Infection Control Today, MedGadget and TedMed, IntelligentM’s leaders could rest assured that their product attained the recognition, reputation and customer base that it deserved. An interview with RFID Technology Review additionally resulted in an invitation to speak at an Orlando, Fla. conference.

With more than 160 articles and a publicity value close to $12 million in just two months, IntelligentM’s President understandably is feeling positive over the company’s future possibilities:

“Keep it up. With all the good stuff we have over the next two months, I am beyond excited about our PR opportunities together!”