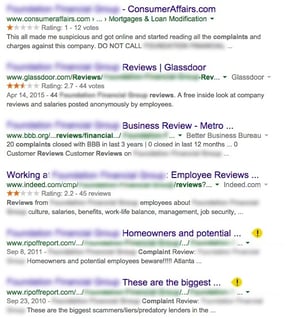 A premier mortgage company had a negative online reputation that was costing them $20,000 per day in documented lost sales. Google searches for the company showed seven negative reviews within the first 20 results. The company needed to fix their image and change the public’s negative perception of them.

This campaign used an aggressive online reputation management program and media relations campaign to increase the company’s exposure. Through relationships with local and national reporters, the campaign positioned the company as a thought leader in the industry. The campaign also leveraged AwardAbility, an award recognition program, to highlight the company’s accomplishments.

Within 24 months, the national mortgage company saw big results, including:

Our employees are more enthusiastic about being associated with the company and feel that we’re something special to be part of."