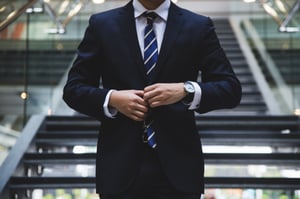 The Challenge
After being underwhelmed by another PR firm, BerganKDV hired Axia Public Relations to announce the internal promotion of its new CEO. Axia recommended securing earned media coverage opportunities for the company and its new CEO, Dave Hinnenkamp, as the quickest way to build such awareness.

The Solution
Axia focused on Hinnenkamp and his rise to CEO. News stories highlighted the fact that he started with the company as an intern, rose to partner, launched the company’s wealth management division, and climbed the ladder to the rank of CEO over the course of 34 years. News about the CEO selection was published prior to the firm’s decision to hire Axia. Through its ideation process, Axia found the right tone to resonate with the news media and audiences for the official transition of the CEO.

Axia’s relationships with news media outlets and reporters was a key component of this campaign. During the CEO transition campaign, Axia leveraged relationships with national media contacts and accounting industry reporters, as well as editors, producers, and columnists in Minnesota and Iowa where BerganKDV has branch locations. Several outlets including Finance & Commerce, Business Record, Minnesota Business, and others published Axia’s official CEO announcement for BerganKDV. With follow-ups and established relationships, the new PR agency secured additional interviews with outlets like the Minnesota/St. Paul Business Journal and Chief Executive that lead to feature stories and opportunities for Hinnenkamp to contribute bylined articles to media outlets.

Impressed with Axia's work, BerganKDV called on the PR agency to promote a merger.