Money Pages hired Axia to build its brand and reputation prior to franchising nationwide. Axia lead a PR campaign and worked with news outlets on earned media. Such media coverage built the credibility the company needed to position itself as a thought-leader in the publishing, direct mail, and advertising industries. 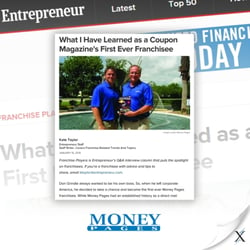 Money Pages is a monthly coupon and savings publication. When it decided to build its brand and reputation in advance of franchising nationwide, trusted advisors referred the growing company to Axia Public Relations.

IDEAS: Axia knew that Money Pages faced stiff competition in its current markets and even more in the franchising space. Yet, after meeting with company executives, it knew that Money Pages stood apart from its competition and that it needed to claim and communicate its differentiations, such as its innovation and community service stories, to the community, consumers, advertisers and potential franchisees.

RESULTS: During the campaign, Axia earned media coverage for Money Pages, its growth and expansion, its unique company culture, its franchise success and featuring its new franchisees, earning media coverage for the company in daily newspapers, business magazines, television news stations and in industry and franchise trade media. Such media coverage built the credibility that Money Pages needed to position itself as a thought-leader in the publishing, direct mail and advertising industries.

The case study continues as Money Pages plans to open even more franchises in target geographic markets in the coming years.