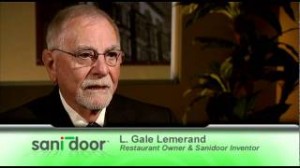 L. Gale Lemerand, a serial entrepreneur from Daytona Beach, Florida, hired Axia Public Relations to promote his invention: a touch-free door-opening system for public restrooms. Sanidoor’s goal was to educate consumers and businesses about the product and how it could reduce the spread of germs in public places like restaurants, hospitals, libraries, and other high-traffic areas. Axia launched a PR campaign throughout the United States, Canada, and beyond through which it earned countless media mentions that brought Sanidoor new customers, distributions, and partners. Coverage of Sanidoor reached more than five million consumers and decision-makers, including earning mentions on nearly every ABC network affiliate.

Sanidoor is a touch-free public restroom door opening system designed to reduce the spread of germs by eliminating contact with door surfaces when entering and exiting restrooms.

Sanidoor hired Axia Public Relations as its public relations agency of record to spread the word about Sanidoor to consumers across the United States and Canada, and Axia did just that, leveraging its media relationships and other contacts to advance the brand and reputation of the Sanidoor new-product launch.