Not having a crisis communications plan in place could mean the end of your business. Every company faces a crisis at one point or another. If handled correctly, you can minimize and even leverage the crisis to build deeper trust with customers and the community.

Natural and man-made disasters happen all the time, and they can do serious damage to the future of your company.


Whether your company faces a devastating crisis like an oil rig explosion or something on a smaller scale, such as negative online reviews, you must be prepared to respond. According to the Department of Commerce, 40% of all companies will not survive a crisis and more than 60% close within two years of experiencing one. For smaller companies, statistics show that 70% go out of business within one year of a crisis.


Having a crisis plan can help your company survive – even thrive.


In 1982, Johnson & Johnson faced a crisis that made headlines around the world. Seven people in Chicago died after taking Tylenol capsules that had been laced with cyanide. Someone had tampered with the bottles with the intent to murder. The company issued a nationwide recall of its Tylenol products – an estimated 31 million bottles with a retail loss of more than $100 million. In addition, J&J issued several nationwide urgent public announcements warning people not to use the product.


It seems almost impossible that a brand could survive after such an ordeal, yet not only did J&J survive the crisis, but the company also boosted its credibility due to its thoughtful and timely PR responses. J&J redefined crisis communications management and turned the matter into a case study in effective public relations and crisis management.


Does your company know the 10 most important steps to prepare for a crisis? Do you have a plan in place and employees trained in proper protocols to handle the unexpected? How your company handles a crisis can mean the difference between success and ultimate failure.

10 steps to prepare your company for Crisis 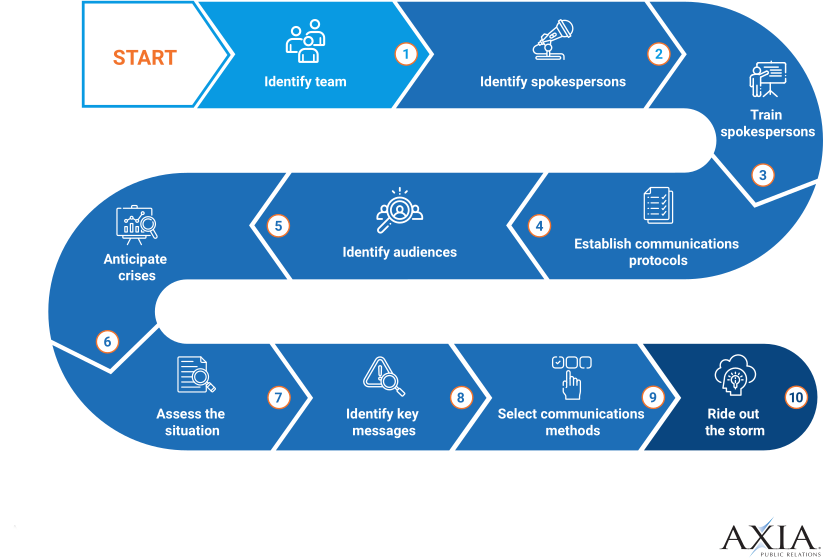 At Axia, we have years of professional experience in crisis communications management. For example, tune in to our #CrisisPR webinar for an in-depth discussion on how to stay on top of any situation. As crisis management counselors, we team up with your company to prepare long before a crisis ever occurs. Axia will show your organization how to put communication first and mitigate negative outcomes that are detrimental to your success. A great way to get started on mapping out your crisis preparedness strategy is to download this e-book: Managing Public Relations in a Crisis.

We can help your company improve online reviews and online reputation management.

This covers 30 days of crisis

This covers five days of crisis

This covers 24 hours of crisis

Not yet experiencing a crisis? Now's a good time to start planning for one. Our expert team will create a custom crisis communications plan for your company in less than six weeks including our 10 crisis steps and sample scripts.

Build your crisis plan with our e-book on Crisis PR. Discover how you can build a crisis PR plan, even as a crisis unfolds, what you should never say during a crisis, and more.

spent on crisis planning, a company saves $7 during a crisis.

of companies never recover from a crisis.

of companies who faced a major crisis sought outside help either during or after their most serious crisis.

“It takes 20 years to build a reputation and

to ruin it. If you think about that, you'll do things differently.”